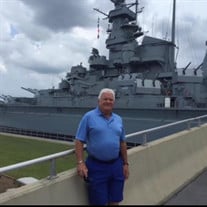 Dwight Eugene Rhodes was born on July 9, 1950, in Henryetta, Oklahoma to Edmond Eugene Rhodes and Thelma Jean (Titsworth) Robertson. He died on Sunday, April 11, 2022, in Owasso, Oklahoma at the age of 71 years. Dwight was raised and educated in Henryetta and graduated with the Henryetta High School Class of 1968. He then went on to Northeastern Oklahoma College in Miami, Oklahoma and then transferred to Oklahoma State University in Stillwater, Oklahoma, where he studied engineering. Dwight spent most of his working life as a combustion engineer with Natco and then ETI until it was bought out by John Zink for a combined 40 years. He was married in Eureka Springs, Arkansas on June 13, 1987, to Verda “Lydell” (Warren) Rhodes. Dwight had most recently been attending Dalton Hill Baptist Church in Owasso. He enjoyed a variety of past times such as golfing, fishing, camping, shooting, hunting, and watching OSU football and basketball. Those he leaves behind who hold many cherished memories include: Wife; Lydell Rhodes 2 Children; Clayton Rhodes and wife Megan Courtney DeVries 7 Grandchildren; Alex, Dylan, Addyson, Faith, Jackson, Mia, and Haven 2 Great Grandchildren; Swayzie and Shiloh Siblings; Kenny Rhodes Debbie Wells and husband Garry Mother; Thelma Robertson He was preceded in death by his father, Eugene. Visitation will be held from 10:00 a.m. to 12:00 a.m. on Saturday, April 16, 2022, at Mowery Funeral Service in Owasso. Funeral service will be 10:00 a.m. on Monday, April 18, 2022, at the Mowery Funeral Service Chapel. Interment will be held at Memorial Park Cemetery in Tulsa. The family requests memorial contributions be made in Dwight’s memory to The American Heart Association, 2227 East Skelly Drive, Tulsa, OK 74105.

Dwight Eugene Rhodes was born on July 9, 1950, in Henryetta, Oklahoma to Edmond Eugene Rhodes and Thelma Jean (Titsworth) Robertson. He died on Sunday, April 11, 2022, in Owasso, Oklahoma at the age of 71 years. Dwight was raised and educated... View Obituary & Service Information

The family of Dwight Eugene Rhodes created this Life Tributes page to make it easy to share your memories.

Send flowers to the Rhodes family.