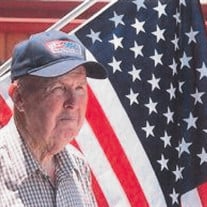 Eddy Lee Bachtold was born October 8, 1928, in Ryan, Oklahoma, to Henry and Minnie Pearlene Dorsett Bachtold. He died Tuesday, December 10, 2019, in Owasso, Oklahoma, at the age of 91 years. Eddy completed his secondary education in Ryan, Oklahoma, and was a graduate of Ryan High School. He was a veteran of the armed forces having served his country honorably during the Korean War from 1950-1952 stationed in Germany. He continued his education at Southwestern Oklahoma State University in Weatherford, Oklahoma. Eddy was married September 23, 1953, in Jones, Oklahoma, to Mary JoAnn Ingram. They had made their home in Owasso, Oklahoma, since 1972. He spent much of his working life as a chief estimator and draftsman with Star Construction. Eddy was a man strong in his Christian walk and had been a member of Bethel Baptist Church in Owasso then later Grace Baptist Church in Owasso. He enjoyed a variety of pastimes including hunting, especially quail and pheasant. He particularly enjoyed his role of Grandpa and Papaw. Eddy was privileged to have been chosen to go on a recent Honor Flight to Washington D.C. where veterans are flown to see the war memorials. Those he leaves behind who hold many cherished memories include: His wife of over 66 years; JoAnn, of the home Children; David Bachtold and wife Jeanette Marianne Baker and husband Dale Mark Bachtold, all of Owasso Nine grandchildren 20 great grandchildren Brother; Harold Bachtold, of Gillette, Wyoming Sister; Mary Beth Mitchell, of Freedom, Oklahoma He was preceded in death by his parents. Funeral service will be held 2:00 pm. Thursday, December 12, 2019, at the Mowery Funeral Service Chapel in Owasso with Pastor Steve Holestine officiating. Public viewing and visitation will be held one hour prior to service time. Final resting place with be at Green Acres Memorial Gardens in rural Owasso. Arrangements and services were entrusted to Mowery Funeral Service of Owasso. www.moweryfs.com

The family of Eddy Lee Bachtold created this Life Tributes page to make it easy to share your memories.

Send flowers to the Bachtold family.