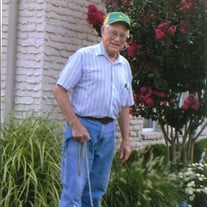 Eldon A. Mozingo was born July 5, 1926, in Mill Creek, Oklahoma, to Joseph Oliver Mozingo and Beedie Barnett Mozingo. He died Monday, February 21, 2022, in Tulsa, Oklahoma, at the age of 95 years. Eldon’s family owned a farm in the Minco, Oklahoma, area, north and west of Hazel Dell. He worked with his dad and the other farmers in the area. During World War II he worked at Tinker Air Force Base. Eldon entered the United States Army where he served his country honorably during the Korean War and was awarded two Bronze Service Stars. He spent 16 months in Japan and Teague Province, Korea. He was married July 24, 1950, in Caddo County, Oklahoma, to Eileen Eden. Eldon continued his education attending Central State University in Edmond, Oklahoma, then Oklahoma A & M (now Oklahoma State University) in Stillwater, Oklahoma, where he earned his bachelor's degree in agricultural education graduating in 1960 . He taught one year in Hinton, Oklahoma, as a junior high and high school teacher. He then was hired as an inspector with the Tulsa City/County Health Department where he worked for 26 years. He was a faithful member of Southwood Baptist Church in Tulsa. Eldon enjoyed a variety of pastimes, especially working on the farm. This included working with cattle or in the cotton fields and wheat fields. He also enjoyed working in his garden raising vegetables. Those he leaves behind who hold many cherished memories include: His wife of over 71 years; Eileen, of the home Children; Earl Mozingo and wife Kimberly, of Ramona, Oklahoma Janette Lee and husband Lonny, of Cushing, Oklahoma Annette Maple, of Owasso, Oklahoma Grandchildren; Sheldon Lee and fiancé Marcie Wiley Crystal Hardway and husband Mickey Aaron Lee Richard Maple and wife Katherine Ryan Alicia Smith and husband Zack Great grandchildren; Elliott, Myles, and Maxwell Maple Hazel and Revan Hardway Sister; Shirley Brown, of Dewar, Oklahoma Brother-in-law; Kenneth Waldon, of Tuttle, Oklahoma He was preceded in death by his parents. Visitation will be held from 4:00 p.m. to 8:00 p.m. Monday, February 28, 2022, at Mowery Funeral Service in Owasso. Graveside service and interment will be held 1:30 p.m. Tuesday, March 1, 2022, at the Evergreen Cemetery in Minco, Oklahoma, with Rev. Dr. Lonny Lee officiating. Arrangements and services were entrusted to Mowery Funeral Service of Owasso, Oklahoma. www.moweryfs.com

Eldon A. Mozingo was born July 5, 1926, in Mill Creek, Oklahoma, to Joseph Oliver Mozingo and Beedie Barnett Mozingo. He died Monday, February 21, 2022, in Tulsa, Oklahoma, at the age of 95 years. Eldon&#8217;s family owned a farm in the Minco,... View Obituary & Service Information

The family of Eldon Alfred Mozingo created this Life Tributes page to make it easy to share your memories.

Send flowers to the Mozingo family.