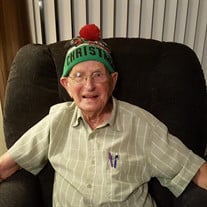 Eldon Willbanks was born on August 27, 1928, in Oakland, Arkansas, to William McKinley Willbanks and Eva May (McNeil) Willbanks. He died on Friday, August 14, 2020, in Tulsa, Oklahoma, at the age of 91 years. He was raised in the Yellville and Flippin, Arkansas area. Eldon served his country honorably in the United States Navy Reserves for 5 years. He was married on February 18, 1951 in Texarkana, Texas to Patsy Ruth (Nelson) Willbanks. Eldon spent most of his working life as an Expeditor with McDonnell-Douglas, but before that he helped work on construction of the dam in Bull Shoals, Arkansas. He was a longtime faithful member and Deacon of Owasso First Baptist Church since moving to Owasso in February 1979. Eldon was also a 32nd Degree Mason with the Yellville, Arkansas Blue Lodge #117. He enjoyed a variety of past times such as playing golf and solving word search puzzles. Those he leaves behind who hold many cherished memories include: Daughter; Tracy Willbanks, of Owasso Two Granddaughters; Morgan Willbanks, of Nevarre, Florida Taylor Willbanks, of Fenton, Michigan Sister; Blanche Dickey and husband James, of Springfield, Missouri Brother; Max Willbanks, of Flippin, Arkansas He was preceded in death by his parents, William and Eva, wife, Patsy, son, Brian, 2 brothers, Travis and Johnny, and sister, Pat. Visitation will be held 4:00 p.m. to 8:00 p.m. on Tuesday, August 18, 2020 at Mowery Funeral Service in Owasso. Graveside service will be held 10:00 a.m. on Wednesday, August 19, 2020 at Memorial Park Cemetery in Tulsa with Pastor Chris Wall officiating. In lieu of flowers, the family requests donations be made in Eldon’s memory to St. Jude Children’s Research Hospital, 262 Danny Thomas Place, Memphis, TN 38105.

Eldon Willbanks was born on August 27, 1928, in Oakland, Arkansas, to William McKinley Willbanks and Eva May (McNeil) Willbanks. He died on Friday, August 14, 2020, in Tulsa, Oklahoma, at the age of 91 years. He was raised in the Yellville and... View Obituary & Service Information

The family of Eldon Willbanks created this Life Tributes page to make it easy to share your memories.

Send flowers to the Willbanks family.