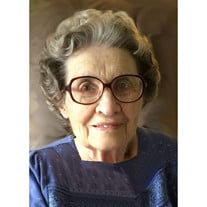 ' Electa Vesta Pearl (Pape) Fish, resident of Owasso, went to be with her Savior after an extended illness at the home of her daughter, Helen E. DeClue on Monday, May 9, 2016, at the age of 90 years and 9 months. Electa was born August 10, 1925, in Zalma, Missouri, to William A. and Rhoda (Sitze) Pape. She was raised and received her education mostly in Zalma and Cape Girardeau, Missouri, graduating from Cape Central High School in 1942. Electa received her Master's degree in Education from S.E Missouri State University where she was president of Phi Beta Kappa. She was a life-long school teacher in Missouri, beginning her career in a one-room schoolhouse at the age of 18 and retiring in 1985 after teaching 7th grade science for 19 years at Louis J. Shultz in Cape Girardeau. On June 8, 1946, Electa and Earl Fish, Jr., were united in marriage in Cape Girardeau. They were blessed with three children. Electa and Earl moved to Owasso to live with their daughter in 2009. Earl passed away in February of 2012. Electa was a longtime member of the Zalma Missionary Baptist Church and attended First Baptist Church of Owasso while living there, making many friends. She loved St. Louis Cardinal baseball, Thunder basketball, putting jigsaw puzzles together, working crossword puzzles, and birdwatching, but especially reading her Bible and talking about her Lord and Savior Jesus Christ. Those that survive and hold many cherished memories are her children and their spouses: Dale G. (Judy) Fish of Zalma, Missouri, Helen E. (Michael) DeClue of Owasso and Jon E. (Tracey) Fish of Cape Girardeau, Missouri; her grandchildren: Susan (Greg) Penninger (Austin, Texas), Timothy Fish (Fort Worth, Texas), Andrew (Chrissy) DeClue (Little Rock, Arkansas), Benjamin (Jessica) DeClue (Reston, Virginia), Erin (Nick) Nill (Owasso, Oklahoma), Kristal (Chad) Flentge (Cape Girardeau, Missouri), Jake Fish (Cape Girardeau, Missouri) and Caitlin and Nathan Gladden (Cape Girardeau, Missouri); great grandchildren: Joshua, Adam and Luke Penninger and Isaac Joseph, Miriam and Titus Flentge; and a large host of nieces, nephews and friends. Electa also got amazing joy from her foster great grandchildren: Ava, Isaiah and Daniel. Besides her husband, Electa was preceded in death by her parents, brother Dale Pape, and sisters Juanita Schrader, Willa Winona Pape and Hilda Bowerman. Visitation was at the Morgan Funeral Home in Advance, Missouri, on Friday, May 20, 2016, from 5:00 p.m. to 8:30 p.m., with memorial services there on Saturday, May 21, 2016, at 10 a.m., followed by burial in Berrong Cemetery, Gipsy, Missouri. Arrangements and services were entrusted to the Mowery Funeral Service of Owasso. www.moweryfs.com '

' Electa Vesta Pearl (Pape) Fish, resident of Owasso, went to be with her Savior after an extended illness at the home of her daughter, Helen E. DeClue on Monday, May 9, 2016, at the age of 90 years and 9 months. Electa was born August 10, 1925,... View Obituary & Service Information

The family of Electa Fish created this Life Tributes page to make it easy to share your memories.

Send flowers to the Fish family.