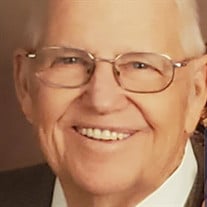 Elmer Lawrence Cooper was born March 20, 1931, in Owasso, Oklahoma, to Charley Cleveland and Ruth Edna Worley Cooper. He died Saturday, December 14, 2019, in Tulsa, Oklahoma, at the age of 88 years. Elmer was reared and educated in Owasso and graduated with the Owasso High School Class of 1949. He was a veteran of the armed forces having served his country honorably with the Unites States Air Force. He later attended the University of Tulsa. He was married July 22, 1955, in Sperry, Oklahoma, to Peggy Joyce Hixson. Elmer was a longtime faithful member of the Collinsville Free Will Baptist Church. He enjoyed a variety of pastimes including woodworking, but he especially enjoyed restoring and working on tractors. Like most grandparents, he was very fond of his role of Pa Pa. Those he leaves behind who hold many cherished memories include: His wife of over 64 years; Peggy, of the home Children; Clayton Cooper and wife Terri, of Collinsville, Oklahoma Brian Cooper and wife Lisa, of Oologah, Oklahoma Craig Cooper and wife Cathey, of Oologah, Oklahoma Brent Cooper and wife Dora, of Tulsa, Oklahoma Seven Grandchildren 11 Great grandchildren Sister; Belinda McNeill, of Oklahoma City And his beloved dog, Bruce He was preceded in death by his parents and his brother, Eldon Cooper Visitation will be held from 4:00 p.m. to 8:00 p.m. Tuesday, December 17, 2019, at Mowery Funeral Service in Owasso. Funeral service will be held 11:00 a.m. Wednesday, December 18, 2019, at the Collinsville Free Will Baptist Church with Pastor Adam Yandell and Pastor James Brown officiating. Serving as casket bearers will be Chris Cooper, Cory Cooper, Marty Cooper, April Cooper, Kelsey Cooper, and Darrin Braggs. Honorary casket bearers will be Mark Hixson, Phaedra Roper, Bob Coppedge, Ed Higgins, Mike Thompson, and Bruce. Committal service and interment will follow at Fairview Cemetery in Owasso. The family requests memorial contributions be made to the Folds of Honor Foundation, Department #13, Tulsa, Oklahoma, 74182, or at [email protected] Arrangements and services were entrusted to Mowery Funeral Service of Owasso. ww.moweryfs.com

Elmer Lawrence Cooper was born March 20, 1931, in Owasso, Oklahoma, to Charley Cleveland and Ruth Edna Worley Cooper. He died Saturday, December 14, 2019, in Tulsa, Oklahoma, at the age of 88 years. Elmer was reared and educated in Owasso... View Obituary & Service Information

The family of Elmer Lawrence Cooper created this Life Tributes page to make it easy to share your memories.

Send flowers to the Cooper family.