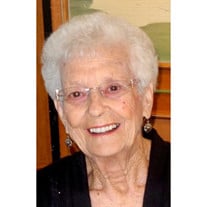 ' Florence Pauline McKee, resident of rural Talala, Oklahoma, passed from this life on Wednesday, November 23, 2016, at St. John Medical Center in Tulsa. She was 93 years of age. Florence was born July 28, 1923, at the family home in Manchester, Oklahoma, one of five children of Bert and Josephine (Young) Cullop. She was raised and received her education in Manchester, graduating high school there. On June 24, 1940 Florence was united in marriage to Carl Rex McKee at Alva, OK. To this union was born one son, Rex Wayne McKee. After his birth they moved to a farm east of Manchester for a year before moving to Waldron, KS. In 1944, during WW 2, Carl went to Salina, Kansas where he worked on an air base. In 1948 they moved to their home and farm on the"hillÃ¢â‚¬Â, 2 miles south of Waldron where they started a Grade A dairy. They averaged milking 48 cows, beginning milking by hand and later by automatic milking equipment. They also raised beef cattle. In the 1970's they sold the dairy, but they continued raising beef cattle until 2005. In 2010, Florence and Carl moved to Talala, Oklahoma to be near Rex and Sharon. She was preceded in death by her husband Carl on May 28, 2011. Florence was a member of the First Church of Owasso and enjoyed traveling. Grateful for having shared her life is her son, Rex McKee and wife Sharon of Talala, Oklahoma; two sisters, Maxine Robertson of Oxford, Kansas, and Jean Bradley of Anthony, Kansas; two grandchildren, Stacey Goodwin and husband Joe of Oklahoma City, Oklahoma, and Jason McKee of Talala; four great grandchildren, Matthew Goodwin, Quinton McKee, Olivia McKee and Grant McKee; and nieces, nephews, other relatives and friends. In addition, the work of Rex and Sharon as hosts of foreign exchange students have resulted in numerous"grandchildrenÃ¢â‚¬Â around the globe, including Kate Holland , originally of the Ukraine and currently of Lafayette, Indiana and her sons Nathan and Eric. Besides her husband, Florence was preceded in death by her parents and two brothers, Ernest and Gerald Cullop. Visitation will be held from 5:00 p.m. Ã¢â‚¬â€œ 7:00 p.m., Wednesday, November 30, 2016, at Mowery Funeral Service. Funeral services will be at 2:00 p.m., Thursday, December 1, 2016, in the sanctuary of First Church of Owasso with Pastor Ben Killion officiating. There will be a second service on Friday, December 2, at 1:00 p.m. in the chapel of the Prairie Rose Funeral Home, 602 East Main Street, Anthony, Kansas with viewing beginning at 11:30 a.m. prior to the service. Pastor Jeff Enabnit will be officiating. Her burial will be in the Waldron Cemetery at Waldron, Kansas. Those that would like to honor Florenc"„¢s memory may do so by contributing to the First Church Ã¢â‚¬â€œ Senior Adult Ministries, 10100 North Garnett Road, Owasso, OK 74055. Arrangements and services have been entrusted to the Mowery Funeral Service of Owasso. www.moweryfs.com'

' Florence Pauline McKee, resident of rural Talala, Oklahoma, passed from this life on Wednesday, November 23, 2016, at St. John Medical Center in Tulsa. She was 93 years of age. Florence was born July 28, 1923, at the family home in Manchester,... View Obituary & Service Information

The family of Florence Pauline McKee created this Life Tributes page to make it easy to share your memories.

Send flowers to the McKee family.