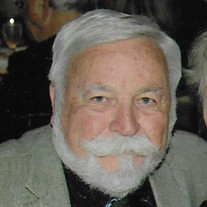 Col. Floyd M. Totten USAF (Ret.) passed from worldly cares on November 17th, 2020 – his 90th birthday. “Bud” as he was known (other than as Dad, and Grandpa Floyd, and sometimes “Zipper”) was born in 1930 at Wichita, Kansas to Floyd Manford Totten, Sr. and Lois Opal Kimbrel Totten. He graduated from Wichita North High School in 1948. He joined the Air Force in 1950, inspired by his uncle Col. Claude Kimbrel who had flown P-47’s in WWII. He did his pilot training at Marana, AZ and was sent to Korea where he flew F-86 Sabre Jets. After 1958 he flew B-47 bombers in the Air Defense Command until the start of the Viet Nam War when he transferred back into fighters. His first tour (100 missions) was in F-104’s, based in Udorn, Thailand in 1967, under ultimate command of Col. Robin Olds. His second tour in 1968 he flew mostly A1-E Skyraiders, amassing more than 300 combat sorties. After the war he was at Luke AFB Arizona, training flyers from the German Luftwaffe to fly F-104’s and F-105’s. He obtained a BA in History from U. of Nebraska, and an MA in History from Northern Arizona State. In 1990 he retired to Montgomery Co., KS to continue flight instruction, retaining his CFI until 2018. His flight time was close to 15,000 hours, in 60 different types of military and civilian aircraft. Col. Totten was decorated with the Silver Star, two Distinguished Flying Crosses and the Air Medal, among others. He was a Master Mason and belonged to the Scottish Rite and York Rite Masonic organizations, to the Quiet Birdmen (pilot organization), the Veterans of Foreign Wars, the Disabled American Veterans, the Caney Valley Corvette Club, the Heartland VietNam Vets, and the Experimental Aircraft Association (Chapter 10 in Owasso, OK). In 1953 he was married to Beverly Pallister, the mother of his six children; and in 1973 to Dorothy Green Saunders of Phoenix, AZ. In 2006 he married Marilyn London Winton Totten of Coffeyville, KS, and they enjoyed traveling and cruising during the last years of Bud’s life. In 2018 his diabetes (due to Agent Orange exposure in Viet Nam and Thailand) progressed to End Stage Renal Disease, and required kidney dialysis 12 hours a week, but he continued to be the fighter he was, until the end. He was determined to make his 90th birthday – and he did, to the day. Bud was a larger than life personality, and friends and family never tired of his huge fund of interesting stories. He was a firm lover of dogs and their many good qualities, saying many times that he couldn’t live without one; needless to say he had many of these pals over his lifetime. Music, books, military history, cars, airplanes and family genealogy were great interests of his. Col. Totten is survived by his wife Marilyn of Owasso, OK; his son Matthew of Manhattan, KS (grandchildren Nate, Louise Matt Jr., Becky, Wyatt, Cody); daughters Sara Totten (Jane, Jackie, James, Beth); Janet Silverthorne (Matt) – Alex, Hannah, Jenna; Lois Millspaugh (Tim) – Samantha, Erin, Annie Rose; Cari Totten – Chad (deceased), Rachel, Karina, Sarah; all of Wichita, KS; and Barbara Tompkins (Cliff) of Huntingtown, Maryland – Trevor, Nikki, Jarod (deceased); and thirty-two great-grandchildren. He is pre-deceased by his parents and a brother Melvin. He will be interred at Arlington National Cemetery, Virginia. Bud Totten was a fighter pilot to the end. He believed any landing a pilot walked away from, was a good one, and every day was a great day to fly! Donations in lieu of flowers please, in his memory, to the Wounded Warrior Project at this link to his Memorial https://communityfundraising.woundedwarriorproject.org/index.cfm?fuseaction=donorDrive.personalCampaign&participantID=3684 or just phone in to WWP and mention his name as the Memorial, 1-855-448-3997. Or to ASPCA, at aspca.org/ways-to-give; scroll down to “Memorial and Honor Gifts.” There will be a Celebration of Life gathering at the EAA hangar, Gundy’s Airport, Owasso, when the pandemic lessens.

The family of Floyd Manford Totten created this Life Tributes page to make it easy to share your memories.

Send flowers to the Totten family.