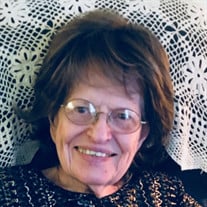 Frances Dean Wise was born September 20, 1919, in Wheeling, West Virginia, to Chester Joseph and Beatrice Bethel Dixon. She died Saturday, October 5, 2019, in Scottsdale, Arizona, at the age of 100. Frances was reared and educated in West Virginia and completed her secondary education at Sherrard High School. She was married February 19, 1954, in Los Angeles, California, to John Wesley Wise. They had made their home in Owasso, Oklahoma, since 1968. Frances spent most of her working life as a stay at home mom and was very proud of her work as a seamstress. She was a longtime faithful member of Discovery Bible Church, formerly Westport Mennonite Brethren Church, in Collinsville, Oklahoma. She was a lifetime member of Beta Sigma Phi. She enjoyed a variety of pastimes including sewing doll clothes and baking. Frances had made her home in Scottsdale, shortly after John’s passing in 2014. Those she leaves behind who hold many cherished memories include: Daughter and son-in-law; Mary and Glenn King, of Scottsdale, Arizona Grandson; Richard Mitchell and wife Natasha, of Skiatook, Oklahoma Sister; Sheila Pendleton, of Round Rock, Texas And a host of nieces, nephews, and other relatives and friends She was preceded in death by her parents, her husband, her daughter, Sabrina Schlotzhauer, three sisters, Thelma Mays, Edna Millhouse, and Mary Ruth Marsh, and two brothers, Lloyd Dean, and Ray Dean. Funeral service will be held 1:30 Friday, October 11, 2019, at Discovery Bible Church with Pastor Mike Frantz. Final resting place will be at Fairview Cemetery in Owasso, Oklahoma. Arrangements and services were entrusted to Mowery Funeral Service of Owasso. www.moweryfs.com

Frances Dean Wise was born September 20, 1919, in Wheeling, West Virginia, to Chester Joseph and Beatrice Bethel Dixon. She died Saturday, October 5, 2019, in Scottsdale, Arizona, at the age of 100. Frances was reared and educated in West... View Obituary & Service Information

The family of Frances Dean Wise created this Life Tributes page to make it easy to share your memories.

Send flowers to the Wise family.