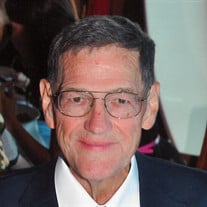 Freddie Lee Hampton was born April 25, 1942, in St. Joseph, Missouri, to Fred H. and Mary Lee Hall Hampton. He died Sunday, February 17, 2019, in Tulsa, Oklahoma, at the age of 76 years. Fred completed his secondary education in Owasso, Oklahoma, and graduated with the Owasso High School Class of 1960. He continued his education attending Tulsa Junior College. He was married March 5, 1962, in Owasso, Oklahoma, to Linda Harris. They have continued to make Owasso their home and raise their family since that time. Fred spent over 40 years as a tool and die maker with Interstate Tool in Tulsa. He was a man of strong faith and had been a faithful member of Central Baptist Church in Owasso. He enjoyed a variety of pastimes including traveling the country in his motor home, fishing, golfing, woodworking projects and spending time with grandkids. He was an avid Oklahoma State University Cowboy fan and enjoyed watching sports. Most important to Fred was his family whom he dearly loved. Those he leaves behind who hold many cherished memories include: His wife of over 56 years; Linda, of the home Children; Leslie Thomas and husband Jeff, of Tulsa Fred E. Hampton and wife Marla, of San Antonio, Texas Grandchildren; Ethan Thomas, of Tulsa Hanna Hampton, of Stillwater, Oklahoma Zachary Hampton, of Tulsa Addison Hampton, of San Antonio, Texas Gavin Hampton, of San Antonio, Texas Brother and sister-in-law; Joe and Mary Ann Hampton, of Collinsville, Oklahoma Sister; Patty Hampton, of Owasso He was preceded in death by his parents and a brother, Bill Hampton. Visitation will be held from 4:00 p.m. to 8:00 p.m. Thursday, February 21, 2019, at Mowery Funeral Service in Owasso. Funeral service will be held 11:00 a.m. Friday, February 22, 2019, at Central Baptist Church in Owasso with Pastor Kevin Laufer officiating. Serving as casket bearers will be Ethan Thomas, Zach Hampton, Gavin Hampton, Brian Hampton, Terry Hampton, and Philip Hampton. Final resting place will be at Ridgelawn Cemetery in Collinsville, Oklahoma. In lieu of flowers, the family requests that donations be made in Fred’s memory to Central Baptist Church Pantry Fund, 9001 North 145th East Avenue, Owasso, Oklahoma 74055. Arrangements and services were entrusted to Mowery Funeral Service in Owasso.

The family of Freddie Lee Hampton created this Life Tributes page to make it easy to share your memories.

Send flowers to the Hampton family.