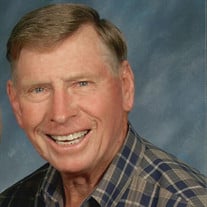 Freddie “Fred” G. Janzen was born on February 22, 1933 in Corn, Oklahoma to Cornelius L. Janzen and Anna M. (Flaming) Janzen. He passed from this life on Thursday, April 8, 2021 in Owasso, Oklahoma at the age of 88 years. Fred was raised and educated in Custer City, Oklahoma and graduated with the Custer City High School Class of 1951. After high school, he attended Southwestern State College in Weatherford, Oklahoma, where he earned a Bachelor of Science Degree in Education. Fred then went on to earn both his Master’s Degree in Education and his Doctorate Degree in Education from Texas Tech University in Lubbock, Texas. He was married on April 18, 1957 in Weatherford to Doris Madonna (Wells) Janzen. Fred served his country honorably as a Sergeant First Class with the United States Army. He spent most of his working life as the Dean of Students and later the Vice President of Student Personnel at Southwestern Oklahoma State University in Weatherford for 21 years. Fred was a faithful follower of Jesus Christ and his Savior and Lord. He was a member of First Baptist Church in both Weatherford and Broken Arrow, Oklahoma for nearly 50 years. In his spare time, he enjoyed woodworking, golfing, Rv-ing with his family, teaching adult Bible studies, and water and snow skiing, but most of all he loved spending time with his family and especially his grandchildren. Those he leaves behind who hold many cherished memories include: Three Children; Vanessa Hutto and husband Tim Max Janzen and wife Lynne Gaylene Buzan and husband Marshall Six Grandchildren; Scott Hutto Jeffrey Hutto Jarret Janzen and wife Liz Cole Janzen Natalie Buzan Nathan Buzan Sister; Ruth Jones He was preceded in death by his parents, Cornelius and Anna, wife, Doris, three brothers, and three sisters.

The family of Freddie "Fred" G. Janzen created this Life Tributes page to make it easy to share your memories.

Send flowers to the Janzen family.