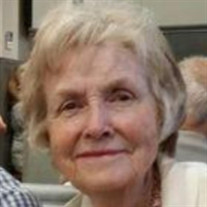 Frieda Fern Denton was born June 16, 1939, in Briartown, Oklahoma, to Charles Monroe and Nellie Jane Williams Raimer. She died Monday, March 1, 2021, in Tulsa, Oklahoma, at the age of 81 years. Frieda was reared and educated in Porum, Oklahoma, and graduated with the Porum High School Class of 1957. She was married December 22, 1955, in Stigler, Oklahoma, to James Edward Denton. They later made their home in Tulsa, Oklahoma where Frieda began her career in bookkeeping and accounting. She worked with Admiral State Bank in Tulsa, then Utica Bank, then finishing at American Airlines. She and Jim made the move to Owasso, Oklahoma, in 2002. Frieda was strong in her Christian faith and had recently attended First Baptist Church in Collinsville, Oklahoma. She enjoyed a variety of pastimes including sewing and had made many of her own clothes. Most important to her was her family whom she dearly loved. Those she leaves behind who hold many cherished memories include: Her husband of over 65 years; Jim, of the home Two sons; Eddy Denton, of Tulsa, Oklahoma Jeff Denton, of Owasso, Oklahoma Grandchildren; Elizabeth Denton, David Denton, Charles Couette, Ashley Denton, Tanner Denton, Cierra Denton, James Eric Denton II, and Sarah Denton Two great grandchildren Two sisters; Doris Wiley and Neva Haney She was preceded in death by her parents, four brothers, three sisters, and a son, James Eric Denton. Visitation will be held from 4:00 p.m. to 8:00 p.m. Thursday, March 4, 2021, at Mowery Funeral Service in Owasso. Funeral service will be held 11:00 a.m. Friday, March 5, 2021, at the Mowery Funeral Service Chapel in Owasso with Pastor Mike Hamilton officiating. Committal service and interment will follow at Graceland Memorial Park Cemetery in Owasso. Arrangements and services were entrusted to Mowery Funeral Service of Owasso. www.moweryfs.com

The family of Frieda Fern Denton created this Life Tributes page to make it easy to share your memories.

Send flowers to the Denton family.