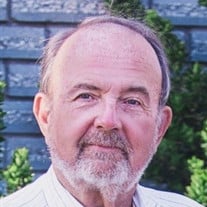 Gary Ray Edwards was born April 9, 1946, in Orange, California, to Mearl Marine and Dora Elizabeth McElhaney Edwards. He died Friday, November 5, 2021, in Owasso, Oklahoma, at the age of 75 years. Gary was reared and educated in Tulsa, Oklahoma, and graduated with the Nathan Hale High School Class of 1964. He continued his education at Oklahoma State Tech at Okmulgee studying Industrial Electronics. He was married April 23, 1966, in Tulsa, Oklahoma, to Nancy Teeter. They had made their home in Owasso since 1975. Gary was a veteran of the armed forces having served his country honorably with the United States Army during the Vietnam War. He worked for Diebold, Rockwell International, and Boeing. He then worked many years for the City of Owasso as a building inspector. Gary enjoyed a variety of pastimes including traveling and going camping. He was also passionate about aviation, having had his pilots license and enjoying building model airplanes. He also played the drums and the guitar. He especially loved his grandchildren who affectionately knew him as “Papa”. Those he leaves behind who hold many cherished memories include: His wife; Nancy, of the home Children; Allan Edwards and wife Tammy, of Owasso, Oklahoma Cheryl Trammel and husband Tim, of Owasso, Oklahoma Terry Edwards and fiancé Courtney Christie, of Oologah, Oklahoma Grandchildren; Lauren Edwards Luke Edwards and fiancé Kelsey Clements Megan Allen and husband Brett Todd Enlow Brittany Trammel and fiancé Taylor Murphy Ashlee Trammel Teryn Edwards, Cacye Christie, and Blade Christie Great grandchildren; Lennon, Brooks, Linzee, Emmalee, and Natalee Brother; David Edwards and wife Pat, of Owasso, Oklahoma He was preceded in death by his parents. Visitation will be held from 4:00 p.m. to 8:00 p.m. Wednesday, November 10, 2021, at Mowery Funeral Service in Owasso. Funeral service will be held 1:30 p.m. Thursday, November 11, 2021, at the Mowery Funeral Service Chapel in Owasso. Serving as casket bearers will be Allan Edwards, Terry Edwards, Tim Trammel, Luke Edwards, Todd Enlow, Brett Allen, and Ben Simeroth. Committal service and interment will follow at Memorial Park Cemetery in Tulsa, Oklahoma. The family requests memorial contributions be made in Gary’s memory to the Folds of Honor Foundation, 5800 North Patriot Drive, Owasso, Oklahoma, 74055, or Blue Star Mothers, www.bluestarmothers.org . Arrangements and services were entrusted to Mowery Funeral Service of Owasso. www.moweryfs.com

The family of Gary Ray Edwards created this Life Tributes page to make it easy to share your memories.

Send flowers to the Edwards family.