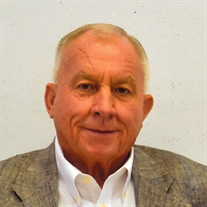 Gary Carl Laird, age 77, of Owasso, passed from this life on Wednesday, September 23, 2020 at his residence. Gary was born September 27, 1942 at Perry, OK to Shirley Carl (S.C.) Laird, Jr and Dorothy Lottie (Wulf) Laird. He was raised and received his education in Perry, Bristow, and Cushing, graduating from Cushing HS in 1960. He enlisted in the US Army on July 8, 1960 and was released to the Army Reserves on Dec. 16, 1960 at Ft. Dix, NJ. Gary attended Oklahoma State University, receiving an Associates degree in Construction Management. On August 23, 1963, Gary was united in marriage to Judith Ann Karseboom at Cushing. To this union, two children were born. For 21 years, he was a project manager for Harmon Construction of Oklahoma City; and was the manager for the construction on three bridges on the Indian Nations Turnpike. He retired from CMS Willowbrook Construction in Chickasha, OK in 2009. Since 2013, Gary was a Chaplain with Christian Resort Ministries while residing in Alamo, Texas. Gary enjoyed golf, fishing and traveling in their RV from coast to coast and border to border. He and Judy moved to Owasso in January of 2020. Those that survive and hold many cherished memories include his wife – Judy; two children – Gary Carl Laird, Jr and wife Gina of Grove, OK; Jody Leake and husband Darryl of Owasso; two grandchildren Lauren and Logan Laird and a sister Drew Orr and husband Les of Ardmore, OK. Also surviving is a niece Tracie Chapman of Mannsville, Oklahoma. Gary was preceded in death by his parents S.C and Dorothy. Graveside Service will be held 1:00 p.m. on Friday, October 2, 2020 at Grace Hill Cemetery in Perry, Oklahoma. In lieu of flowers, the family requests memorial donations be made in Gary’s name to CRMI, 2186 Jackson Keller Road #2094, San Antonio, Texas 78213. Arrangements were entrusted to the Mowery Funeral Service of Owasso. www.moweryfs.com

The family of Gary Carl Laird created this Life Tributes page to make it easy to share your memories.

Send flowers to the Laird family.