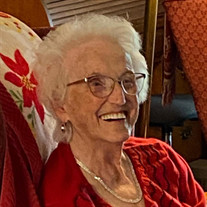 Geneva Jewel Teachman, 87, of Collinsville, Oklahoma, went to her new home March 8, 2022, in Tulsa, Oklahoma. Geneva was born April 24, 1934, in Braman, Oklahoma, to Lewis Douglas Cross and Gloria Viola (Carson) Cross. Geneva's mother died when she was three months old. Her father remarried and Geneva was raised by her new mother, Maudie (Heath) Cross, who loved her as her own. She grew up with seven siblings and attended school in Tonkawa, Oklahoma. As a teenager, working at a Tonkawa café, she met Melvin Leon Teachman. They married on June 3, 1950, in Tonkawa and after living in Kansas for a few years they then moved to Collinsville, Oklahoma in 1969. Geneva attended Beauty College where she earned her cosmetology license. She spent most of her working life as a beautician and ran "Geneva's Salon" out of her home for 42 years. Geneva was a faithful member of First Christian Church in Owasso for almost 40 years. She enjoyed a variety of past times such as, gardening, oil painting, and cake decorating. She enjoyed church activities, spending time with her family and friends, and cooking. Those she leaves behind who hold many cherished memories include: Her Husband of 71 years; Melvin Teachman 2 Daughters; Melva Curtis and husband Terry Gayla Miller 9 Grandchildren; Lisa, Bobby, Kristie, Jeff, Chelsea, Aaron, Natalie, Nicole, and Ryan. 19 Great Grandchildren 4 sisters; Louisa Spiser Darlene Ruch Nila Branch and husband Claude lla Vorasaph Brother; Edward Cross and wife Cora Many nieces and nephews; She was preceded in death by her parents, 2 brothers, Richard and Doug, and her son Steve. Visitation will be held from 2:00 p.m. to 4:00 p.m. on Sunday, March 13, 2022, at Mowery Funeral Service in Owasso. Funeral service will be 1:00 p.m. on Monday, March 14, 2022, at First Church in Owasso with Pastor Jake Follis officiating. Interment will follow at Ridgelawn Cemetery in Collinsville. Arrangements and services were entrusted to Mowery Funeral Service of Owasso.

The family of Geneva Jewel Teachman created this Life Tributes page to make it easy to share your memories.

Send flowers to the Teachman family.