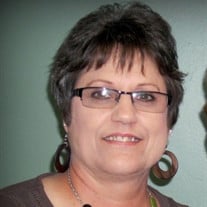 Glenda Colleen Risenhoover was born March 31, 1959, in Little Rock, Arkansas, to Gary Eugene Wells and Lola Virginia Watts Wells. She passed from this life on Wednesday, December 1, 2021, in Broken Arrow, Oklahoma, at the age of 62 years. Glenda moved with her family to the Tulsa area where she completed her secondary education and graduated with the East Central High School Class of 1977. She continued her studies attending Tulsa Community College. Glenda was married to Troy “Mac” Risenhoover in Fort Smith, Arkansas. She and Mac had made their home in Fort Gibson, Oklahoma, where she worked at the 4-Mile Stop. She then worked as the office administrator for Advantage Glass Contracting in Tulsa. “Sis,” as she was affectionately known by her friends and family, enjoyed a variety of pastimes, especially spending time working in her flower garden. She loved her dogs, Izzy and Soda, who perished with her. She loved spending time with her family and friends and was always able to make them laugh. Those she leaves with many cherished memories include: Her husband of 38 years Mac; Nieces and Nephews she considered her children: Nathan Wells, Adam Clanton, Kelly Wells, Amy Clanton-Dow, Nicole Remaly, Justin Wells, and Averi Wells; Great Nieces and Nephews: Kodie Wells, Charlee Wells, Hadley Wells, Charley Kate Dow, Chandler Dow, Brooklyn Slie [pronounced “sly”], and Carson Clanton; One Sister, Darlene and Husband Brent Clanton of Houston, Tx One Brother, Kirk Wells and wife Sarah of Broken Arrow, Ok Step-Daughter: Crystal Risenhoover Cotner of Muskogee, OK Step-Grandson: Andrew Cotner of Muskogee, OK Brother in Law: Barbarosa Risenhoover and wife Cheryl of Collinsville, OK Nieces: Lindsay Risenhoover Hurst and Brandon, Kacy Risenhoover Summers and Micah and Nephew Austin Risenhoover and Jillian. Glenda was a pillar at Advantage Glass Contracting for 25 years. She was Mama Bear to all the guys there and will be greatly missed. She was preceded in death by her parents, and her brother, Randy Eugene Wells. Funeral service will be held 2:00 p.m. Thursday, December 9, 2021, at the Mowery Funeral Service Chapel in Owasso. The family requests memorial contributions be made in Glenda’s memory to the St. Jude Children’s Research Hospital, P.O. Box 1000, Dept. 142, Memphis, Tennessee, 38101-9908, or www.stjude.org . Arrangements and services were entrusted to Mowery Funeral Service of Owasso. www.moweryfs.com

Glenda Colleen Risenhoover was born March 31, 1959, in Little Rock, Arkansas, to Gary Eugene Wells and Lola Virginia Watts Wells. She passed from this life on Wednesday, December 1, 2021, in Broken Arrow, Oklahoma, at the age of 62 years.... View Obituary & Service Information

The family of Glenda "Sis" Risenhoover created this Life Tributes page to make it easy to share your memories.

Send flowers to the Risenhoover family.