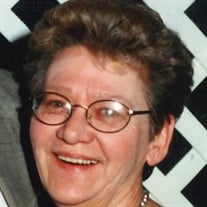 Glynis Patricia Hess was born on April 21, 1947, in Brooklyn, New York to Clarence M. Garschina and Helen Leona (Armstrong) Garschina. She passed from this life on Monday, November 8, 2021, in Owasso, Oklahoma at the age of 74 years. Glynis was raised and educated in Glenrock, New Jersey and graduated with the Glenrock High School Class of 1965. While working at a diner in Glenrock, she met Emel Clarence Hess and four months later on September 25, 1965, they were married. Glynis spent most of her working life in the home raising her children. She has made Owasso, Oklahoma her home since moving to the area in 1976. Glynis had most recently been attending Life Church in Owasso. In her spare time, she enjoyed a variety of past times such as quilting, gardening, bowling, painting, traveling with her sister and crafting. Those she leaves behind who hold many cherished memories include: Her Husband; Emel Hess 7 Children; Debbie Rhein and husband John Jerry Hess and wife Tina Nancy Dowd and husband Monte Kenny Hess Steve Hess and wife Mickie Jeff Hess and wife Vickie Butch Hess and wife Kathy 14 Grandchildren and 13 Great Grandchildren Siblings; Linda Green and husband Norman Roy Henderson and wife Ann Kenneth Garschina and wife April She was preceded in death by her parents, Clarence and Helen, and her brother, Neil. A memorial service will be held 1:00 p.m. on Monday, November 15, 2021 at the Mowery Funeral Service Chapel in Owasso. In lieu of flowers, the family requests memorial donations be made in Glynis’ memory to Skiatook Paws and Claws Animal Rescue, 4605 W. C Rogers Blvd., Skiatook, OK 74070.

Glynis Patricia Hess was born on April 21, 1947, in Brooklyn, New York to Clarence M. Garschina and Helen Leona (Armstrong) Garschina. She passed from this life on Monday, November 8, 2021, in Owasso, Oklahoma at the age of 74 years. Glynis... View Obituary & Service Information

The family of Glynis Patricia Hess created this Life Tributes page to make it easy to share your memories.

Send flowers to the Hess family.