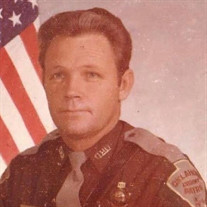 Glynn Raye Roberts was born July 3, 1940, in Houston, Texas, to Lyle Lawson and Ethel Jewel Human Roberts. He died Friday, November 15, 2019, in Tulsa, Oklahoma, at the age of 79 years. Glynn completed his education at Northwestern Oklahoma State University in Alva, Oklahoma, earning his bachelor’s degree in sociology. He was a veteran of the armed forces having served his country honorably with the United States Marine Corp. He was married July 12, 1976, in Houston, Texas, to Rose Callahan. Glynn spent most of his working life as a State Trooper with the Oklahoma Highway Patrol. He was a member of the Masonic Lodge and a 32nd Degree Mason. He and Rose had made their home in Collinsville, Oklahoma, since 1996. Glynn enjoyed a variety of pastimes including fishing, working with his tools, and just piddling around in his garage. He especially enjoyed his role of Papa to his grandkids. Those he leaves behind who hold many cherished memories include: His wife of over43 years; Rose, of the home Children; Kathy Washburn and husband Royal, of Tulsa Danny Roberts and wife Terri, of Claremore Valerie Ditterline and husband Andy, of Fort Worth, Texas Stan Roberts and wife Rachelle, of Collinsville Lisa West and husband Jim, of Collinsville Dara Franklin, of Collinsville Andy Bailey, of Collinsville 11 grandchildren 16 great grandchildren He was preceded in death by his parents, one sister, three brothers, and a granddaughter. Visitation will be held from 4:00 p.m. to 8:00 p.m. Tuesday, November 19, 2019, at Mowery Funeral Service in Owasso. Funeral will be held 1:30 p.m. Wednesday, November 20, 2019, at the Mowery Funeral Service Chapel with Chaplain Sam Garner officiating. Serving as casket bearers and providing graveside rites will be the Oklahoma Highway Patrol Honor Guard. Committal service and interment will be held at Ridgelawn Cemetery in Collinsville, Oklahoma. Arrangements and services were entrusted to Mowery Funeral Service of Owasso. www.moweryfs.com

The family of Glynn Raye Roberts created this Life Tributes page to make it easy to share your memories.

Send flowers to the Roberts family.