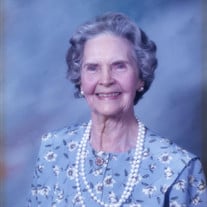 Gynith Louise (Messenger) Sossamon , age 98, of Owasso, Oklahoma, passed away on Tuesday, June 2, 2020. She was born December 3, 1921, in a small community near Crane, Missouri, to the late Harvey and Alta Lou Gracey (Mitchell) Messenger. Gynith’s father was a supervisor on bridge projects and the family lived in various small towns in Missouri and Arkansas during the depression. Gynith met the love of her life, Howard Sossamon, during high school in Ozark, Arkansas. Following graduation, Howard enlisted in the Army Air Corps and fought in the African and European theaters to defeat Germany and Italy in World War II. During these years, Gynith worked a variety of jobs, as a file clerk for Consolidated Aircraft in San Diego, California, an assembly line inspector of airplane engines for the Packard Motor Car Company in Detroit, Michigan, an operator for Bell Telephone Company, and as an inspector for Boeing Airplane Company in Wichita, Kansas. After completing 50 missions as a navigator on B-24 Liberator Bombers, Howard Sossamon returned to Ozark and proposed to Gynith. They married soon after on February 5, 1945, in Batesville, Arkansas. Married life was a great adventure for Howard and Gy, as she was known by her family and friends. For a while they lived in Ozark, Arkansas, and Borger, Texas, before settling in Sallisaw, Oklahoma, in 1949, where Howard worked for McDonald Chevrolet. In 1968, the family moved to Collinsville, Oklahoma, and Howard became the dealer at Howard Chevrolet. In 1971 the dealership moved to Owasso, Oklahoma, where Howard worked until his retirement in 1986. During these years, Gynith worked hard at home and had various responsibilities at the dealership, including baking a fresh cake every Saturday for customers and employees. Family friend, Arthur Wilson, Jr., remembers to this day the mouth-watering pineapple upside down cake she made. Gynith and Howard had two sons, Dub and Dana Sossamon. Both sons worked in the family business for many years early in their careers. Gynith and Howard were married for 50 wonderful years until Howard’s death in 1995. Gynith took great delight in her children, grandchildren, and great-grandchildren for the next 25 years and participated in events at First Presbyterian Church of Owasso. In 2015, Gynith moved to Homestead of Owasso, a nearby assisted living center, where she enjoyed an active life, made many new friends, and became an enthusiastic Bingo player. Loving family members include sons Dub Sossamon and his wife Sherry; Dana Sossamon and his wife Lynn; sister, Penny Petit of Springfield, Missouri, four grandchildren, six great-grandchildren, and many nieces and nephews. She was predeceased by sisters Mary McDaniel and Willie McVey, brother Kemett Messenger, and grandson, Jeffrey Stiles. Due to the COVID-19 pandemic, a private family graveside service will be held with arrangements by Mowery Funeral Service in Owasso. The family requests memorial contributions be made to the First Presbyterian Church of Owasso, 12800 East 85th Street North, Owasso, Oklahoma, 74055. www.moweryfs.com

The family of Gynith Louise Sossamon created this Life Tributes page to make it easy to share your memories.

Send flowers to the Sossamon family.