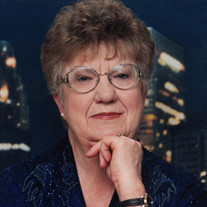 Helen Elaine Carlson, 83, of Owasso, Oklahoma, passed away Thursday, May 14, 2020, in Tulsa, Oklahoma, with her family by her side. She was born March 1, 1937, in Denver, Colorado, to Marie Edna (Craig) Carlock and Charles A.H. Carlock. Helen graduated from East High School in Denver, Colorado, in 1955 and would go on to earn her Associate’s Degree in Business from Colorado Women’s College in 1958 and then her Bachelor’s Degree in Elementary Education from the University of Northern Colorado in 1960. From there her love of teaching began. Her first teaching assignment was at an elementary school in Torrance, California. While living in California she would go on to earn her Master’s Degree in Elementary Education at California State University in 1963. With her Master’s Degree in hand she would apply and be accepted for a teaching position with the Department of Defense for an elementary school at Yokota Air Base in Japan. Teaching overseas fulfilled both Helen’s love of teaching and love of traveling. At this point she was ready to settle down and start a family. She married the late Ray W. Carlson on December 13, 1968, at Nellis AFB in Las Vegas, Nevada. They would have two children before being transferred to Mt. Home AFB in Idaho. Upon retiring from Air Force life they would settle in Grand Junction, Colorado, where they lived an active lifestyle for 40 years which included 25-plus cruises around the world. In 2017 Helen and Ray moved to Owasso, Oklahoma, to be closer to their daughter. Helen’s son would later join the family in Oklahoma as well. Helen is survived by her sister, Beverly (Carlock) Donahue, her two children, Stacey Carol (Carlson) Albertson, of Collinsville, Oklahoma, and Brad William Carlson, of Tulsa, Oklahoma. She is also survived by her five grandchildren, Chayla Albertson, Joshua Albertson, Ricaely Ninobla, Jamison Albertson, and Sophia Albertson. Helen was preceded in death by her parents, her husband, Ray Carlson, and her brother, Charles R. Carlock, in 1977. Helen’s love of learning and adventure continued to the very end. She would like to be remembered as a loyal, loving, and caring daughter, sister, wife, mother, and friend. Private family services will be held. Arrangements and services were entrusted to Mowery Funeral Service of Owasso, Oklahoma. www.moweryfs.com

Helen Elaine Carlson, 83, of Owasso, Oklahoma, passed away Thursday, May 14, 2020, in Tulsa, Oklahoma, with her family by her side. She was born March 1, 1937, in Denver, Colorado, to Marie Edna (Craig) Carlock and Charles A.H. Carlock. Helen... View Obituary & Service Information

The family of Helen Elaine Carlson created this Life Tributes page to make it easy to share your memories.

Send flowers to the Carlson family.