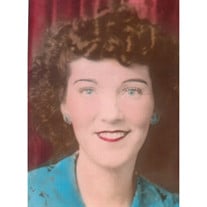 ' Helen Ruby Raburn was born November 15, 1921, in Lebanon, Kansas, to Ernest E."Pet" and Ollie C. (Harshbarger) Breakey. She died Wednesday, August 31, 2016, in Owasso, Oklahoma, at the age of 94 years. Helen was reared and educated in Lebanon, Kansas and was a graduate of Lebanon High School and was active as a cheerleader. She was married in 1939, in Tulsa, Oklahoma, to William Randolph Raburn. She spent most of her working life as a homemaker and caring for her family. She had attended Memorial Christian Church in Tulsa. She enjoyed a variety of pastimes, especially attending her son's ballgames when they were young.Loving family members include:Two sons; Mike Raburn and wife Sharron, of Owasso Gary Raburn, of Wichita, KansasThree grandchildren; Shelley Hastings and husband Jay, of Owasso Tim Raburn and wife Desiree, of Corpus Christi, Texas Desaree Raburn, of Tulsa, OKThree great grandchildren; Kennedy Goins, Kadence Raburn, and Raegan RaburnSister; Frances Myers, of Smith Center, KansasShe was preceded in death by her parents, her husband, sister, Lucille Looper, and a brother, Charlie Breakey. Visitation will be held from 6:00 p.m. to 8:00 p.m. Thursday, September 1, 2016, at Mowery Funeral Service in Owasso. Funeral service will be held 2:00 Friday, September 2, 2016, at the Mowery Funeral Service Chapel in Owasso with Pastor Ben Killion officiating. Private interment will follow at Floral Haven Memorial Gardens in Broken Arrow, Oklahoma. Arrangements and services were entrusted to Mowery Funeral Service of Owasso.www.moweryfs.com'

The family of Helen Ruby Raburn created this Life Tributes page to make it easy to share your memories.

Send flowers to the Raburn family.