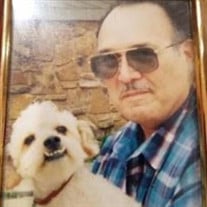 Henry Lerman was born July 23, 1939, in Denver, Colorado, to Henry Lerman, Sr., and Antonia Cruz Rivera. He died Wednesday, March 11, 2020, in Tulsa, Oklahoma, at the age of 80 years. Henry completed his secondary education in Victoria, New Mexico, graduating high school in 1958. He was a veteran of the armed forces having served his country honorably with the United States Air Force. He spent most of his working life as a machinist with McDonnell-Douglas in Tulsa, Oklahoma. He also spent time with the Air National Guard. Henry was married June 3, 1989, in Owasso, Oklahoma, to Gail June Lerman. He had lived in the Owasso area since 1986 having moved from Tulsa. He was a lifetime member of the National Rifle Association. He enjoyed a variety of pastimes, especially collecting and shooting guns. He was a collector of baseball cards and was an avid Chicago Cubs fan. Those he leaves behind who hold many cherished memories include: His children; Steven Lerman, David Lerman, and Lisa Hall and her husband Dale Grandson; Joe Hall and wife August Nephew; Dustin Martin and wife Monica He was preceded in death by his parents, his wife Dorothy, then later his wife Gail, granddaughter, Shawna Hall, and brother, Conrad Lerman, who was killed while serving in the Vietnam War. Funeral service will be held 2:00 p.m. Friday, March 13, 2020, at the Mowery Funeral Service Chapel in Owasso with Pastor Leonard Pirtle officiating. There will be a viewing and visitation time one hour prior to the service. Final resting place will follow at Floral Haven Memorial Gardens in Broken Arrow, Oklahoma. Arrangements and services were entrusted to Mowery Funeral Service of Owasso. www.moweryfs.com

The family of Henry Lerman created this Life Tributes page to make it easy to share your memories.

Send flowers to the Lerman family.