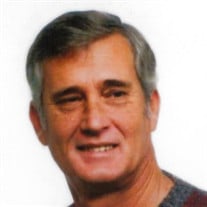 Henry Curtis Willis was born December 14, 1940, in Talala, Oklahoma, to Henry Chester and Mary Olive Clark Willis. He died Wednesday, February 20, 2019, in Tulsa, Oklahoma, at the age of 78 years. Henry was reared and educated in Talala and graduated with the Talala High School Class of 1958. He had been active with the Boy Scouts of America and was selected to attend Boys State in 1957. He was a veteran of the US Navy, serving aboard the USS Edson. He was married April 29, 1966, in Wagoner, Oklahoma, to Norma McCollum. They have been residents of Collinsville, Oklahoma, for a number of years. Henry spent over 35 years as a lineman and troubleshooter with AEP-PSO before his retirement in 2001. He loved to spend time outdoors and was an avid hunter and fisherman. He planted a big garden and enjoyed sharing it with those who were closest to him. Those he leaves behind who hold many cherished memories include: His wife of over 52 years; Norma, of the home. Daughter and son-in-law; Lori and Randy Pouliot, and their daughter, Haley, all of Tulsa. Sister and brother-in-law; Mary and Harley Holt, of Claremore. Also, many nieces and nephews, as well as extended family and friends. He was preceded in death by his parents, and two brothers, George Willis and Robert Willis. Visitation will be held from 2:00 p.m. to 4:00 p.m. Sunday, February 24, 2019, at Mowery Funeral Service in Owasso. Graveside funeral service will be held 1:00 p.m. Monday, February 25, 2019, at Fairview Cemetery in Talala, with Bill Sharpe officiating. Arrangements and services were entrusted to Mowery Funeral Service of Owasso.

Henry Curtis Willis was born December 14, 1940, in Talala, Oklahoma, to Henry Chester and Mary Olive Clark Willis. He died Wednesday, February 20, 2019, in Tulsa, Oklahoma, at the age of 78 years. Henry was reared and educated in Talala and... View Obituary & Service Information

The family of Henry Curtis Willis created this Life Tributes page to make it easy to share your memories.

Send flowers to the Willis family.