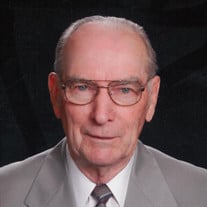 Herman Lewis Moon was born December 18, 1931, in Fort Smith, Arkansas, to James Raymond and Helen Louise Sprouse Moon. He died Tuesday, August 25, 2020, in Tulsa, Oklahoma, at the age of 88 years. Herman was reared and educated in Fort Smith, Arkansas, and was a graduate of Fort Smith High School. He was a veteran of the armed forces having served his country honorably with the United State Marine Corps during the Korean War. He was married September 19, 1953, in Fort Smith to Patsy Ruth Bull. After making their home in Tulsa, he continued his education at the University of Tulsa and Tulsa Junior College. They moved several times the first few years, living in various places until moving to Owasso. He spent most of his working life as an electronics engineer mostly with Time Mark Corporation and Midwest Time Control. He was a faithful member and deacon of the First Baptist Church in Collinsville, Oklahoma. He enjoyed a variety of pastimes including researching his family history, photography and woodworking. He especially enjoyed his role as Grandpa to his grandchildren and great grandchildren whom he dearly loved. Those he leaves behind who hold many cherished memories include: His wife of over 66 years; Pat Moon, of the home Daughter; Debbie Moon-Owen and husband David, of Tulsa, Oklahoma Son; Mike Moon and wife Luann, of Owasso, Oklahoma Grandchildren; Michelle Baker and husband David, of Owasso, Oklahoma Andy Moon and wife Bailey, of Honolulu, Hawaii Ben Owen, of Tulsa Alicia Kobilnyk and husband Jonathan, of Tulsa Jeremy Moon and wife Amelia, of San Diego, California Fraser Kastner and Marion Kastner, of Tulsa Great grandchildren; Lilly Baker, Ethan Baker, Hannah Kobilnyk, Rachel Kobilnyk, and Eloise Moon Brother; Jim Moon, of Tulsa, Oklahoma He was preceded in death by his parents, stepfather, Clifford Cottingham, sister, Ann Cottingham, brother, Don Moon, and daughter, Lori Moon-Kastner. Visitation will be held from 9:00 a.m. to 11:00 a.m. with funeral service beginning at 11:00 at the Mowery Funeral Service Chapel in Owasso with Pastor Tim Prock officiating. Committal service and interment will follow at Graceland Memorial Park Cemetery in Owasso. The family requests memorial contributions be made to the Folds of Honor Foundation, [email protected] , or The Salvation Army, P.O. Box 53, Owasso, Oklahoma, 74055. Arrangements and services were entrusted to Mowery Funeral Service of Owasso. www.moweryfs.com

The family of Herman Lewis Moon created this Life Tributes page to make it easy to share your memories.

Send flowers to the Moon family.