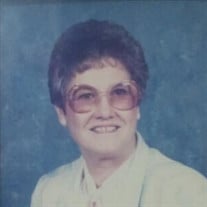 OBITUARY FOR FAYE DICKSON Hettie Fayrene “Faye” Dickson was born January 13, 1931, in Searcy, Arkansas, to Henry and Carrie Jowers Benton. She died Sunday, February 14, 2021, in Owasso, Oklahoma, at the age of 90 years. Faye was reared and educated in Searcy, Arkansas, and was a graduate of Searcy High School. She was married to Albert Slaughter in 1947 and they moved to Illinois in 1956. Faye was a faithful member of Oglesby Baptist Church in Oglesby, Illinois, where she was active with the church women’s fellowship. She was also a member of the V.F.W. in LaSalle, Illinois, and the Ladd Moose Lodge in Ladd, Illinois. Albert preceded her in death in 1974. Faye spent much of her working life as a department manager with Bergner’s in Peru, Illinois. She was married to her second husband Marion Dickson on February 14, 2000. He preceded her in death in 2009. Faye enjoyed a variety of pastimes including cooking and having friends and family gatherings. She especially enjoyed her children, grandchildren, and great grandchildren. She moved from Dallas, Texas, to Owasso, Oklahoma, in 2017. Those she leaves behind who hold many cherished memories include: Her children; Sarah Armon and husband Ed, of Owasso, Oklahoma John Slaughter and wife Susan, of Arlington West, Texas Son-in-law; George Greenya, of Key West, Florida Grandchildren; Steve Armon and wife Mandy Len Armon and wife Lori Melissa Slaughter Granddaughter-in-law; Charmaine Slaughter Great grandchildren; Ashlee Armon, Lexi Johnson, Kyle and Corbin Armon Bonus daughters; Mona Faye and Sharon Very special friends; Charles and Cheri Judd and family Faye and Marion’s pet dog, Dixie She was preceded in death by her parents, her first husband, Albert Slaughter, her second husband, Marion Dickson, daughter, Jeanie Slaughter Greenya, and grandson, Jeramy Slaughter. Faye will be laid to rest next to Albert Slaughter at the Forster Chapel Cemetery in Searcy, Arkansas. The family requests memorial contributions be made to the Arthritis Foundation, 4520 South Harvard Avenue, Suite 100, Tulsa, Oklahoma, 74135. Arrangements and services were entrusted to Mowery Funeral Service of Owasso. www.moweryfs.com

The family of Hettie Fayrene "Faye" Dickson created this Life Tributes page to make it easy to share your memories.

Send flowers to the Dickson family.