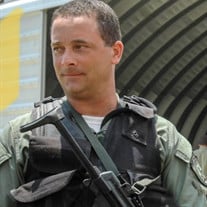 Officer Howard Kritzer Smith III was born on May 11, 1969, in Spokane, Washington to Howard Kritzer Smith II and Grace Marie (Higdon) Kirby. He passed from this life on Monday, September 27, 2021, in Tulsa, Oklahoma at the age of 52 years. Howard was raised and educated in Meeker, Oklahoma and graduated with the Meeker High School Class of 1987. He then went on to attend classes at St Gregory’s University in Shawnee, Oklahoma and Northeastern State University in Tahlequah, Oklahoma. Howard was married on October 1, 1996, in Las Vegas, Nevada to Susan Cathleen (Daniels) Smith. He spent most of his working life as a police officer with the Owasso Police Department for 26 years. In his time with the department, Howard has served on the Honor Guard and as the Assistant S.W.A.T. Commander. He enjoyed a variety of past times such as going to the lake, jeeping, hanging out with Rasta, playing pranks, and serving as Tori’s modeling manager. Those he leaves behind who hold many cherished memories include: His Wife; Sue Smith Daughters; Tori Smith Shauna Bellator and husband Jay April Benjamin Angie Parker Grandchildren; Kendall, Amelia, Dawson, and Archer Siblings; Eddie Kirby and wife Debbie Wesley Kirby Kelly Josway and husband Jim Samantha Keener Mother; Grace Kirby Granddogs; Winston and Lola He was preceded in death by his father, Howard Kritzer Smith II. Visitation will be held from 2:00 p.m. to 4:00 p.m. on Sunday, October 3, 2021, at the Mowery Funeral Service Chapel. Funeral service will be held at 9:42 a.m. on Monday, October 4, 2021, at First Baptist Church Owasso. Graveside service and honors will be held at 2:30 p.m. at Calvary Cemetery in Shawnee, Oklahoma. In lieu of flowers, the family request’s donations be made in Howard’s memory to Owasso Cops for Kids, P.O. Box 149, Owasso, Oklahoma 74055. Arrangements and services provided by Mowery Funeral Service.

The family of Officer Howard Kritzer Smith, III created this Life Tributes page to make it easy to share your memories.