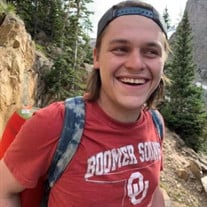 Ian Christopher Scott Moore was born on January 25, 1996 in Fort Worth, Texas to William “Brian” Moore and Mary Ellen (Anderson) Moore. He died on Saturday, January 23, 2021 in Owasso, Oklahoma at the age of 24 years old. Ian was raised and educated in Owasso, Oklahoma and graduated with the Owasso High School Class of 2014. He worked various jobs, but most recently accepted a position as a mechanical maintenance tech with Kimberly Clark in Jenks, Oklahoma. Ian truly felt like this was going to be his forever career, and he was so happy to take this step forward. Ian was very curious about the world around him and he often took electronics apart and put them back together, just so he could see how they worked. In his spare time he enjoyed politics, listening to all types of music, going to concerts and live shows, watching Oklahoma Sooner football, and spending time with his friends and family, especially his nephews. In his short time here on Earth, Ian was fortunate enough to spend some time living in both California and Colorado. These periods of time were some of his happiest moments in his life, where he grew to become the best version of himself. Ian was brilliant, self-taught, and a teacher to many. He was also compassionate, always a helping hand to anyone who needed it. He made deep and meaningful connections with most everyone he met. Those he leaves behind who hold many cherished memories include: Father; Brian Moore Mother; Mary Moore Sister; Madison Moore Brother; Evan Moore Nephews; Dax McGuire and Otto Moore Beloved life partner; Lacee Walter Grandmother; Neta Carrino and husband Dave Carrino 8 cousins; Austin, Aaron, K.C., Riley, Carson, Kellen, Meg, and Mary He was preceded in death by his grandpa, Carmon “Shorty” Anderson, grandparents, Dr. William Moore and Priscilla Moore, and his uncle, Scott Moore. Visitation will be held from 4:00 to 8:00 p.m. on Thursday, January 28, 2021 at the Mowery Funeral Service Chapel. Funeral service will be held at 2:00 p.m. on Friday, January 21, 2021 at the Mowery Funeral Service Chapel with Kenneth Jara officiating. In lieu of flowers, the family requests memorial donations be made in Ian’s GoFundMe account. Arrangements and services were entrusted to Mowery Funeral Service.

The family of Ian Christopher Scott Moore created this Life Tributes page to make it easy to share your memories.

Send flowers to the Moore family.