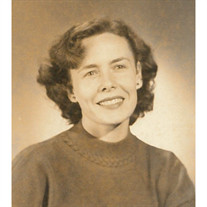 'Ila Faye Anderson was born September 5, 1931, at Booneville, Arkansas, to Jack Andrew and Vernetta (Williams) Smith. She passed away surrounded by her family on Friday, May 13, 2016, in Owasso, Oklahoma, at the age of 84 years. Faye was married April 7, 1948, Booneville to Robert Matthew"BobÃ¢â‚¬Â Anderson, Jr. She spent much of her working life as a homemaker and rancher. She enjoyed a variety of pastimes and was quite accomplished as a seamstress, quilter, and cook. She was an avid gardener and spent countless hours canning vegetables from her garden then sharing them with family, friends, and neighbors. She enjoyed hosting large family gatherings preparing everyon"„¢s favorite foods and spoiling her grandchildren. She loved animals and cared for numerous abandoned animals over the years. Faye also served her community as a volunteer at Barnes Elementary in Owasso working on several P.T.A. committees. She assisted Ruth Evans with health screenings for the students. She served as a Cub Scout den mother of Pack 57 of the Boy Scouts of America. She was a member of the Owasso Quarterback Club where she was active preparing and serving food to the Owasso Rams football team after home games. She will be remembered as a devoted wife, mother, and grandmother.Loving family members include:Her husband of over 68 years; Bob, of the homeSon; Wayne Anderson and wife Carla, of Houston, TexasDaughter; Judy Hart and husband Charley, of Claremore, OklahomaSon; Jack Anderson and wife Cyndee, of Claremore, OklahomaSix grandchildrenEight great grandchildrenShe was preceded in death by her parents, and two brothers, Vernon Smith and Raymond Smith. Funeral service will be held 1:00 p.m. Friday, May 20, 2016, at the Mowery Funeral Service Chapel in Owasso with Pastor Leonard Pirtle officiating. Serving as casket bearers will be Shane Anderson, Jason Anderson, Joshua Anderson, Andrew Hart, Matt Shanahan, and Nick Furman. Committal and interment will follow at Graceland Memorial Park Cemetery in Owasso, Oklahoma. Arrangements and services were entrusted to Mowery Funeral Service of Owasso.www.moweryfs.com '

'Ila Faye Anderson was born September 5, 1931, at Booneville, Arkansas, to Jack Andrew and Vernetta (Williams) Smith. She passed away surrounded by her family on Friday, May 13, 2016, in Owasso, Oklahoma, at the age of 84 years. Faye was married... View Obituary & Service Information

The family of Ila Faye Anderson created this Life Tributes page to make it easy to share your memories.

Send flowers to the Anderson family.