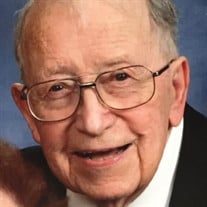 John Clifford Jones (Clifford) was born December 15, 1928, in Lowell, Arkansas, to Noel Calvin Jones and Phebe Caroline Smith-Jones. He died Wednesday, December 18, 2019, in Owasso, Oklahoma, at the age of 91 years. Clifford completed his secondary education in Rogers, Arkansas, and graduated with the Rogers High School Class of 1947. He was a veteran of the armed forces having served his country honorably with the United States Army during the Korean War. He was married July 14, 1956, in Fayetteville, Arkansas, to Sarah Etta Brooks. They had made their home in Owasso, Oklahoma, since 1974. Clifford spent much of his working life as a credit union manager with Oklahoma Steel Casting Company and as a hotel night auditor in the Tulsa, area. He was a longtime faithful member of Bethany Missionary Baptist Church in Tulsa, Oklahoma, where he served as a deacon. Those he leaves behind who hold many cherished memories include: His wife of over 63 years; Sarah, of the home Son and daughter-in-law; Ted and Theresa Jones, of Owasso, Oklahoma Daughter and son-in-law; Dr. Tammy and Dr. Doug Parker, of Gravette, Arkansas Six grandsons; Philip Jones and wife Shawna, of Salt Lake City, Utah Dr. Stephen Jones and wife Kathryn, of Little Rock, Arkansas Lincoln Parker and wife Jessica, of Rocky, Oklahoma Quinten Parker and wife Janee’, of Centerton, Arkansas Ethan Parker, of Gravette, Arkansas Luke Jones, of Owasso, Oklahoma Four Great grandchildren; Silas and Andrew Jones, Abigail Jones, and Amelia Parker He was preceded in death by his parents, two sisters, Morene Mabry and Geraldine Jones, and his brother, Herbert Jones. Visitation will be held from 4:00 p.m. to 8:00 p.m. Friday, December 20, 2019, at Mowery Funeral Service in Owasso. Graveside funeral service will be held 2:00 p.m. Saturday, December 21, 2019, at Fairview Memorial Gardens in Fayetteville, Arkansas. Arrangements and services were entrusted to Mowery Funeral Service of Owasso. www.moweryfs.com

The family of J. Clifford Jones created this Life Tributes page to make it easy to share your memories.