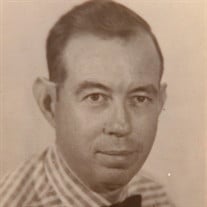 Jack L. Billingslea was born October 22, 1919, in Avant, Oklahoma, to Homer Andrew “Buck” Billingslea and Erma Lamore Barker. He died Monday, December 31, 2018, in Collinsville, Oklahoma, at the age of 99 years. Jack was a veteran of the armed forces having served his country honorably with the United States Army during World War II. He was married July 18, 1942, in Claremore, Oklahoma, to Elsie Mae Young. They live most of their married life in the Owasso-Collinsville area. Jack spent much of his working life as an electronics technician with Douglas Aircraft in Tulsa. He was a faithful evangelist and dedicated his life to Christian ministry and sharing the gospel. Jack spent countless hours reading and studying the Bible as well as spending time in prayer. He was a talented musician and played the guitar, steel guitar, and mandolin. Those he leaves behind who hold many cherished memories include: His son and daughter-in-law; James and Brenda Billingslea, of Collinsville, Oklahoma Three grandchildren and several great grandchildren. Sister; Margie Katen, of Sperry, Oklahoma. He was preceded in death by his parents, his wife Elsie, and son, Phillip Billingslea. Visitation will be held from 2:00 p.m. to 5:00 Sunday, January 6, 2019, at Mowery Funeral Service in Owasso. Funeral service will be held 10:00 a.m. Monday, January 7, 2019, at the Mowery Funeral Service Chapel in Owasso with Pastor Leonard Pirtle officiating. Serving as casket bearers will be Bruce Mize, Bruce Mize, Jr., Joshua Abbet, Cody Mize, Ryan Flores, and Justin Billingslea. Final resting place will be at Ross-Mayes Cemetery in Salina, Oklahoma. Arrangements and services were entrusted to Mowery Funeral Service of Owasso.

The family of Jack Leroy Billingslea created this Life Tributes page to make it easy to share your memories.

Send flowers to the Billingslea family.