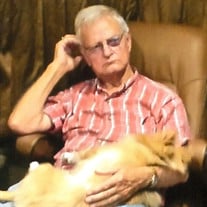 Jack Ward Thompson, Sr. was born January 10, 1939, in Bengal, Oklahoma. He passed from this life on Thursday, September 26, 2019 in Tulsa, Oklahoma, at the age of 80 years. Jack was raised and educated in Cave Springs, Oklahoma and graduated with the Cave Springs High School Class of 1956. He attended classes for one year at Northeastern State University in Tahlequah, Oklahoma and then enlisted and served his country honorably in the United States Army National Guard. Jack was married on August 27, 1958 in Eufaula, Oklahoma to Betty Sue (Kelley) Thompson. He spent most of his working life as a machinist with American Airlines in Tulsa for almost 20 years. Jack was a faithful member of First Baptist Church in Collinsville, Oklahoma for 18 years. He was also a member of the Pilgrim Masonic Lodge in Tulsa and earned the title of Grand Master. Jack had a variety of pastimes such as traveling, working on classic cars, going to the lake, hunting, fishing, and spending time with his dog, Honey. Those he leaves behind who hold many cherished memories include: Wife; Betty Thompson, of the home 2 Sons; Ronnie Thompson and wife Sherrie, of Collinsville Jack Ward Thompson, Jr., of Owasso 5 Grandchildren; Amber Lanphere, of Tulsa Terrie Morgan, of Skiatook Jamie Thompson, of Coweta Tyler Thompson, of Broken Arrow Dillon Thompson, of Tulsa 2 Brothers; Donald Thompson and wife Carolyn, of Carbondale, Illinois Roy Thompson and wife Susie, of Stillwell, Oklahoma Sister; June Watkins and husband Steve, of Stillwell, Oklahoma He was preceded in death by his mother, Virginia, sister, Daphnae, and grandson, Blake. Visitation will be held from 4:00 p.m. to 8:00 p.m. Monday, September 30, 2019 at Mowery Funeral Service. Graveside service will be held at 10:00 a.m. Tuesday, October 1, 2019, at Graceland Memorial Park in Owasso with Pastor Gordon Small and Pastor Tim Prock officiating. Arrangements and services were entrusted to Mowery Funeral Service of Owasso.

Jack Ward Thompson, Sr. was born January 10, 1939, in Bengal, Oklahoma. He passed from this life on Thursday, September 26, 2019 in Tulsa, Oklahoma, at the age of 80 years. Jack was raised and educated in Cave Springs, Oklahoma and graduated... View Obituary & Service Information

The family of Jack Ward Thompson Sr. created this Life Tributes page to make it easy to share your memories.

Send flowers to the Thompson family.