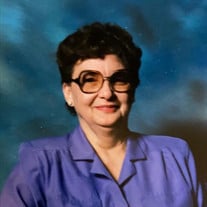 Veda Bell “Jackie” Wright was born January 9, 1933, in Branson, Missouri, to George and Mary Mae Catherine Compton Gearin. She died Friday, November 13, 2020, in Tulsa, Oklahoma, at the age of 87 years. Jackie was reared and educated in Branson, Missouri, and was graduate of Branson High School. At the age of 17, she began working at the Levi Blue Jeans manufacturing company in Branson, then later transferred to Springfield, Missouri, where she continued working for Levi. She was married March 6, 1953, to Pete Wright. She worked many years as a shipping and receiving clerk with J.C. Penney. Jackie enjoyed a variety of pastimes including shopping, alot, and spending time at the casino. She especially enjoyed family gatherings and cooking huge meals with plenty of leftovers. She was particularly fond of her role of “Nana”, and spoiling her grandkids and great grandkids. Those she leaves behind who hold many cherished memories include: Son; Randy, of Owasso Grandchildren; Brandy Edwards and partner, Van Stanton, of Owasso, Oklahoma Kurtis Wright and partner, Haylie Weaver, of Collinsville, Oklahoma Great grandchildren; Teryn Edwards, Owen Wright, Hunter Wright, Gunnar Wright, and A.J. Weaver She was preceded in death by her parents, husband, Pete Wright, brother, Francis Gearin, and sister, Jeannie Tuttle. Funeral service will be held 2:00 p.m. Wednesday, November 18, 2020, at the Mowery Funeral Service Chapel in Owasso. Final resting place will be at Ridgelawn Cemetery in Collinsville, Oklahoma. Arrangements and services were entrusted to Mowery Funeral Service of Owasso. www.moweryfs.com

The family of Jackie Wright created this Life Tributes page to make it easy to share your memories.

Send flowers to the Wright family.