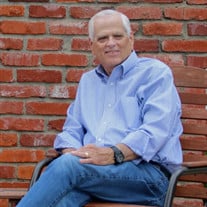 James Russell Beers was born May 5, 1953, in Bartlesville, Oklahoma, to Calvin Winston Beers and Mary Etta Rash Beers. He died Wednesday, December 22, 2021, in Owasso, Oklahoma, at the age of 68 years. Jim completed his secondary education in Bartlesville and graduated from College High School in 1971. He continued his education attending Central State University in Edmond, Oklahoma. He was married December 21, 1974, in Hunter, Oklahoma, to Vicky Lynn Easterly. They were able to celebrate 47 years of marriage before his passing. Jim spent most of his working life in the lumber and wood industry in Oklahoma, City beginning with Caston Lumber from 1975-1978, Paxton Lumber from 1978-1996, then Cedar Creek Lumber from 1996-2020. He was most recently working as general manger with Dakota Premium Hardwoods. Jim was a man strong in his faith and was a faithful member of First Baptist Church in Owasso where he served as a deacon. He enjoyed a variety of pastimes, especially spending time outdoors, hunting and fishing. He was also an avid fan of the Oklahoma Sooners. He was particularly fond of his role of “Papa” to his grandchildren. Those he leaves behind who hold many cherished memories include: Wife; Vicky, of the home Three sons; Byron Beers, of Tahlequah, Oklahoma Brad Beers and wife Tracy, of Broken Arrow, Oklahoma Kevin Beers and wife Candy, of Tulsa, Oklahoma Grandchildren; Brylee Beers, Aspen Beers, and Matthew Beers Sister; Marla Jacobs and husband Larry, of Oklahoma City, Oklahoma Brother; Alan Beers and wife Shelly, of Owasso, Oklahoma He was preceded in death by his parents. Funeral service will be held 10:00 a.m. Tuesday, January 4, 2022, at the First Baptist Church of Owasso with Pastor Chris Wall officiating. Also sharing memories will be Rick Stull, Billy Replogle, Bill Sharp, and Ron Briggs. Final resting place will be at Floral Haven Memorial Gardens in Broken Arrow, Oklahoma. The family requests memorial contributions be made in Jim’s memory to The Mission-FBCO, P.O. Box 1020, Owasso, Oklahoma, 74055. Arrangements and services were entrusted to Mowery Funeral Service of Owasso. www.moweryfs.com

The family of James Russell Beers created this Life Tributes page to make it easy to share your memories.

Send flowers to the Beers family.