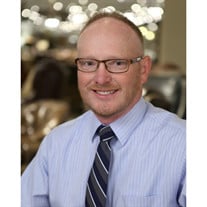 'James"JimÃ¢â‚¬Â Alexander Hert was born July 1, 1970, on the Forbes Air Force Base in Topeka, Kansas, to Richard James Hert and Carrie Lee Higgins. He passed from this life Thursday, May 18, 2017, in Tulsa, Oklahoma, at the age of 46 years. Jim was raised in Oklahoma and graduated with the Owasso High School Class of 1988. He served his country for four years in the US Army as an ear, nose and throat technician. He then went on to earn a Bachelor's Degree in Psychology and Nursing from Jacksonville State University in Jacksonville, Alabama. After college Jim worked as a nurse in hospitals in Anniston, Alabama. Upon returning to Oklahoma he spent the majority of his working life as a salesman, most recently at Mathis Brothers Furniture in Tulsa. He loved to be outdoors and enjoyed a variety of activities such as golfing, fishing, hunting, archery, canoeing, and motorcycles. Loving family members include:Daughter; Katherine Smith, of Orting, WashingtonFather; James Hert and wife Pat, of OwassoMother; Carrie Jones and husband Curtis, of Mulberry, ArkansasBrother; Christopher Hert, of TulsaSister; Angie Jackson, of Broken ArrowGranddaughters; Ashlyn and Teagan Smith. of Orting WashingtonHe also left behind two stepbrothers, two stepsisters, as well as many aunts, uncles, nieces, cousins and his faithful four-legged fur baby companion of seven years, Sadie. Memorial service will be held at 2:00 p.m., Friday, June 9, 2017, at the Mowery Funeral Service Chapel in Owasso, Oklahoma, with Reverend Leonard Pirtle officiating. The family requests memorial contributions be made to Office of Development, Shriner's Hospitals for Children, 2900 Rocky Pointe Drive, Tampa, FL 33607, or American Diabetes Association, 6600 South Yale Avenue, Suite 1310, Tulsa, OK 74136. Arrangements and services were entrusted to Mowery Funeral Service of Owasso.www.moweryfs.com'

The family of James Alexander Hert Jim created this Life Tributes page to make it easy to share your memories.

Send flowers to the Hert family.