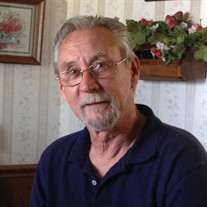 James “Jim” Andrew Gleghorn, Jr. was born on April 16, 1944, in Hope, Arkansas, to James Andrew Gleghorn, Sr. and Mary Charlene (Littleton) Gleghorn. He died on Tuesday, August 18, 2020, in Tulsa, Oklahoma, at the age of 76 years. He was raised and educated in the Tulsa area and attended Sand Springs High School. Jim was married on August 20, 1963 in Sand Springs, Oklahoma to Beverly Jean (Bearpaw) Gleghorn. He spent most of his working life as the owner and operator of Jim’s Paint and Body Shop in Tulsa for 50 years. He also owned “Event Services,” a company he started to judge car shows. Jim has been a member of Restoration Church in Tulsa since 1998. He enjoyed a variety of past times such as restoring cars and attending and judging car shows, but most of all he loved spending time with his grandchildren. Those he leaves behind who hold many cherished memories include: Wife; Beverly Gleghorn, of Tulsa 2 Sons; Bruce Gleghorn and wife Lori, of Catoosa Darin Gleghorn and wife Lynette, of Greeley, Colorado 5 Grandchildren; Levi Gleghorn and wife Diamond, of Tulsa Tucker Gleghorn, of Tulsa Rhett Gleghorn, of Greeley, Colorado Rhiatta Gleghorn, of Greeley, Colorado Cody West and wife Amy, of Skiatook, Oklahoma 2 Great Grandchilden; Mason Gleghorn, of Coweta Hadlee West, of Skiatook 4 Siblings; Charles Gleghorn and wife Yuri, of Carlsbad, California Cynda Gleghorn, of Vinita Gail Ann Flanigan, of Broken Arrow Mark Gleghorn and wife Teresa, of Collinsville He was preceded in death by his parents, James and Mary and brothers, Jerry and Mike. In lieu of flowers, the family requests donations be made in Jim’s memory to the charity of your choice. Arrangements and services were entrusted to Mowery Funeral Service.

The family of James "Jim" Andrew Gleghorn Jr. created this Life Tributes page to make it easy to share your memories.

Send flowers to the Gleghorn family.