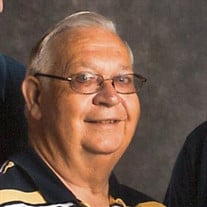 James “Jim” C. Loyd was born May 8, 1940, in Windsor, Pennsylvania to Charles Franklin Loyd and Dora Daisy (Mundis) Loyd. He died Monday, November 25, 2019, in Owasso, Oklahoma, at the age of 79 years. Jim was raised in Windsor and educated in Red Lion, Pennsylvania. He graduated with the Red Lion High School Class of 1958. He spent most of his working life as an Airline Employee as a ticket agent, member of the ground crew, and supervisor with Allegheny Airlines in 1960 until they later became U.S. Airways. He retired from U S Airways in 1993. From 1993 to 2000 he worked in sales and distribution for the Ahwatukee News in Phoenix, AZ. He was married in Windsor on April 15, 1961 to Faye Louise (Miller) Loyd. Jim moved to Collinsville, Oklahoma in 2000 and drove a school bus for Owasso Public Schools. He was a faithful member of Central Baptist Church in Owasso since 2000. Jim enjoyed a variety of past times: working in his garden and watching sport; the Oklahoma City Thunder was a favorite. He especially loved spending time with his children and grandchildren. Those family members he leaves behind who hold many cherished memories include: Wife: Faye Loyd, of Collinsville Two Sons: Cary Loyd and wife Kathryn, of Harrisburg, Pennsylvania Mark Loyd and wife Holly, of Tulsa Two Grandsons: Nathaniel Loyd, of Harrisburg, Pennsylvania Trevor Loyd, of Harrisburg, Pennsylvania Three Granddaughters: Amanda Landers and husband J.D., of Tulsa Allyson Loyd, of Bixby Jodianne Loyd, of Tulsa Sister: Donalene Keener and husband Preston, of Windsor, Pennsylvania He was preceded in death by his parents, Charles and Dora. Memorial service will be held at 11:00 a.m. Monday, December 16, 2019, at Central Baptist Church in Owasso with Reverend Kevin Laufer officiating. In lieu of flowers the family request donations be made in Jim’s memory to Central Baptist Church Food Pantry, 9001 North 145th East Avenue, Owasso, Oklahoma 74055. Arrangements and services were entrusted to Mowery Funeral Service of Owasso.

The family of James C. "Jim" Loyd created this Life Tributes page to make it easy to share your memories.

Send flowers to the Loyd family.