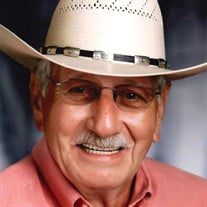 James Benny Martin was born December 29, 1941, in Sand Springs, Oklahoma, to James B. and Hazel Lorinne Harper Martin. He died Friday, January 29, 2021, in Owasso, Oklahoma, at the age of 79 years. After completing his secondary education, James enlisted in the United States Army where he faithfully and honorably served his country. He spent most of his working life as a foreman with Braden Steel in Tulsa. He was married May 27, 1971, to Helen Louise Glenn, in Miami, Oklahoma. She preceded him in death on December 26, 2013. James was a member of the Assembly of God and the Owasso VFW Post #7180. He enjoyed a variety of pastimes including fishing, hunting, working in his yard, and watching old Westerns. He also enjoyed breakfast with his friends at Mom’s Diner and visiting his friends at Owasso Auto Spa weekly to get his truck cleaned. He was an avid fan of Oklahoma Sooner football and St. Louis Cardinal baseball. He especially enjoyed hanging out with his sweetheart, Katherine Fort. Those he leaves behind who hold many cherished memories include: His children; Gary Glenn and wife Joyce, of Owasso, Oklahoma Randy Glenn and wife Deana, of Oklahoma City, Oklahoma Brenda King and fiancé Justen Brent Smith, D.D.S., of Sperry, Oklahoma Grandchildren; Greg Glenn Jennifer Harmon and husband Jonathan Amber King and fiancé Jamy Stull Natalie King, all of Owasso Great grandchildren; Audrey and Evan Harmon Brother; Frank Martin, of Bartlesville, Oklahoma He was preceded in death by his parents, his loving wife, Helen Martin, sister, Lou Ann Edmonds, and brothers, Paul William Martin, Don Robert Martin, and Billy David Martin. A private family burial will be held at a later date with interment at Green Acres Memorial Gardens in rural Owasso. Family requests memorial contributions be made to Owasso V.F.W. # 7180, 7708 North 131st East Court, Owasso, OK 74055 Arrangements and services were entrusted to Mowery Funeral Service of Owasso. www.moweryfs.com

James Benny Martin was born December 29, 1941, in Sand Springs, Oklahoma, to James B. and Hazel Lorinne Harper Martin. He died Friday, January 29, 2021, in Owasso, Oklahoma, at the age of 79 years. After completing his secondary education,... View Obituary & Service Information

The family of James Benny Martin created this Life Tributes page to make it easy to share your memories.

Send flowers to the Martin family.