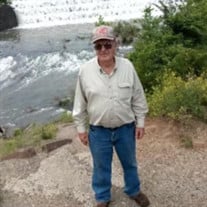 James Alexander Martin was born July 6, 1937, in Chicago, Illinois, to Alex Riggs Martin and Laura Goodrich Martin. He died Friday, June 4, 2021, in Tulsa, Oklahoma, at the age of 83 years. James completed his secondary education in Yonkers, New York, and was a graduate of Forrest Hills High School. He was a veteran of the armed forces having served his country honorably for 6 years with the United States Army. James was married February 10, 1961, in Yonkers, New York, to Joan E. Clark. He had worked as a salesman for Campbell Soup, Lipton, and U.S. Steel until he moved to upstate New York in 1964 and created a family farm raising pigs and Angus cattle while harvesting hay, corn, and soybeans. He spent much of his life as a farmer and rancher, first in Easton, New York, and then moving to Mason, Oklahoma in 1983 to raise Beefmaster cattle on a ranch of over 220 acres called Panther Ledge. He enjoyed a variety of pastimes but loved to spend time taking care of the land, his cattle and fishing. Most important in his life was his wife and family. Those he leaves behind who hold many cherished memories include: His loving and devoted wife for over 60 years; Joan Children; Brandon Martin Beth Martin-Cavosie Jennifer Martin-Koscelny Grandchildren; Michele Kilmartin Katie Koscelny-Wilburn Sam Koscelny Great grandson; Daniel John Kilmartin III He was preceded in death by his parents and one brother, David Martin. Private family disposition will be held at a later date. Arrangements and services were entrusted to Mowery Funeral Service of Owasso. www.moweryfs.com

The family of James Alexander Martin created this Life Tributes page to make it easy to share your memories.

Send flowers to the Martin family.