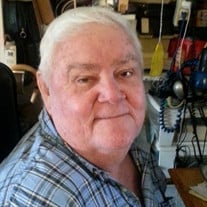 James Daniel “Dan” Ryan Sr. was born April 29, 1938 in Miami, Oklahoma to Albert Wayne Ryan and Agnes Nell (Walker) Ryan. He passed from this life on Friday, September 28, 2018, in Tulsa, Oklahoma, at the age of 80 years. Dan was raised and educated in Miami and graduated with the Miami High School Class of 1956. After High School Dan enlisted and served in the United States Marine Corps. A few years after being honorably discharged, he met and married Meredith Ann (Gaudette) Ryan in Bentonville, Arkansas on February 1, 1965. Dan spent most of his working life as an Aerospace Electrician and worked for various aviation companies. He was a Jack of all trades and enjoyed working on anything mechanical and was known for taking everything apart and putting it back together to see how it worked. Dan was also handy with carpentry work and even built his own home. He loved spending time with his family and loved to laugh. Those he leaves behind who hold many cherished memories include: His wife; Meredith Ryan, of Owasso Son; James Daniel Ryan Jr. and wife Vickie, of Owasso 2 Daughters; Bette Whitworth and husband John, of Canyon, Texas Bobbie Hicks and husband Jeremy, of Chelsea, Oklahoma 8 Grandchildren and 17 Great Grandchildren and numerous nieces and nephews Sister; Carolyn Ashley, of Collinsville Brother; Albert Ryan and wife Brenda, of Alabama He was preceded in death by his parents, Albert and Agnes, 2 brothers, Thomas and John, 2 Sisters, Judith and Edna, Son, Richard, and 2 Daughters, Darlene and Lisa. Memorial Service will be held 10:00 a.m. Saturday, October 6, 2018 at St. Therese Catholic Church in Collinsville, Oklahoma with Father Ernesto Calvillo officiating. Interment will follow at 3:00 p.m. at Hillcrest Cemetery in Galena, Kansas. Arrangements and services were entrusted to Mowery Funeral Service of Owasso.

The family of James Daniel "Dan" Ryan Sr. created this Life Tributes page to make it easy to share your memories.

Send flowers to the Ryan family.