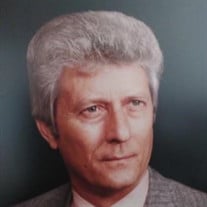 James Harold Smith was born on December 7, 1932 in Honey Grove, Texas to James Columbus “Lum” Smith and Ruby (Temple) Smith. He died on Saturday, January 2, 2021 in Tulsa, Oklahoma at the age of 88 years. He was raised and educated in Elbert, Texas and graduated with the Elbert High School Class of 1950. James was married on March 5, 1954 in Throckmorton, Texas to Sylvia Cecilia “Sue” (Rogers) Smith. He spent most of his working life as an Oil Drilling Equipment Manufacturer with H.B. Incorporated in Oklahoma City, Oklahoma for over 25 years. James was a longtime faithful member of Bethel Baptist Church in Norman, Oklahoma for over 50 years. In his spare time, he enjoyed a variety of past times such as being out on the lake and water skiing, rebuilding and restoring hot rods, and building redwood decks for friends in the community. Those he leaves behind who hold many cherished memories include: His wife of 66 years; Sue Smith 2 Sons; Ronald Smith and wife Paula Deryl Smith Daughter-in-law; Charissa Smith 5 Grandchildren; Sarah Beth Butterworth and husband Zach James Smith and wife Jami Paul Smith and wife Krista Kaitlin Bray and husband Channing Kallie Smith and fiancé Caleb 9 Great Grandchildren; Maylie, Gavin, Coralyn, Connor, Ava, Brody, Braylen, Halle, and Hunter He was preceded in death by his parents, Lum and Ruby, and son Rodney.

The family of James Harold Smith created this Life Tributes page to make it easy to share your memories.