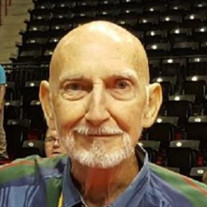 James R. “Jim” Wilkins, Sr. was born January 5, 1941, in Morrilton, Arkansas to Smith W. Wilkins and Josephine (Hudlow) Wilkins. He died Monday, May 11, 2020, in Owasso, Oklahoma, at the age of 79 years. Jim was raised and educated in Morrilton where he graduated high school. He spent most of his working life as the Owner and Operator of Wilkins Company, a manufacturing company in Porum, Oklahoma. For the past 27 years, Jim enjoyed spending time with his companion, Barbara Hornbuckle. He enjoyed a variety of past times such as deep-sea fishing, speed boating, being out on the water at Lake Eufaula, golfing, traveling, attending NASCAR races, and going to the casinos. Those he leaves behind who hold many cherished memories include: 2 Sons; James Wilkins and wife Debbie, of Owasso, Oklahoma Kevin Holmes and wife Deanna, of Tulsa, Oklahoma Daughter; Valietta Lohstoeter, of Scott, Arkansas 11 Grandchildren; Kristin, Jimmy, Hannah, Caleb, Joshua, Emily, Sarah, Daniel, Phillip, Jayme, and Michelle Cousin; Melissa Wilkins He was preceded in death by his parents, Smith and Josephine, and son, Douglas.

The family of James R. "Jim" Wilkins created this Life Tributes page to make it easy to share your memories.

Send flowers to the Wilkins family.