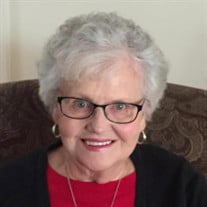 Janice Ellen Rice, 78, of Owasso, Oklahoma, went home to be with her Savior May 3, 2020, with her family by her side after fighting a courageous battle with ALS. She was born March 26, 1942 in Lockesburg, Arkansas, to the late Autry C. and Hazel M. (Frederick) Bell. Jan later moved to Nashville, Arkansas, where she was reared and educated graduating from Nashville High School in 1960. While in high school Jan met her late husband Lester D. Rice. They became engaged during her senior year and married October 8, 1960. They lived in many states, Puerto Rico, and Bermuda while Lester served in the United States Navy for more than 20 years, settling after retirement almost 42 years ago in Owasso, Oklahoma. Jan and Lester were married 44 years before Lester passed in February of 2004. Together they raised three strong, independent, and devoted daughters, Pam, Angie, and Michele. Jan spent most of her working life as a daycare worker at Owasso’s First Baptist Church, Margaret Hudson Program, and Little People’s Land. Her favorite pastimes were spending time with family, doing Sudoku and crossword puzzles, playing solitaire, watching HGTV, and entertaining her friends from the JOY class at Owasso’s Central Baptist Church. She was an active 42-year member of Central Baptist and treasured her friendships built there. Those she leaves behind who hold many cherished memories include daughters Pam Bennett (Noel), of Collinsville, Oklahoma; Angie Harmon (Bob), of Owasso Oklahoma; and Michele Wilson (Doug), of Owasso, Oklahoma. Grandchildren who will greatly miss their “Memaw” are Erin Miller, of Broken Arrow, Oklahoma; Lindsey Bennett, of Tulsa, Oklahoma; Katie Harmon, of Owasso, Oklahoma; Anna Harmon, of Owasso, Oklahoma; Gabriel Wilson, of Owasso, Oklahoma; and Sadie Wilson, of Owasso, Oklahoma. Great-grandchildren she leaves behind are Connor Martin and Bailey Miller, of Broken Arrow, Oklahoma. Other survivors include her brother and sister-in-law Ronnie and Sandra Bell, of Texarkana, Arkansas. She was predeceased by her husband, parents, and brother Gene Bell. Visitation will be held from 4:00 p.m. to 8:00 p.m. Thursday, May 7, 2020, at Mowery Funeral Service in Owasso. A private family Service will be held 10:30 a.m. Friday, May 8, 2020, and can be viewed at www.facebook.com/cbcowasso. Final resting place will be at Graceland Memorial Park Cemetery in Owasso, Oklahoma. The family requests memorial contributions be made in Jan’s memory to Central Baptist Church food pantry, 9001 North 145th East Avenue, Owasso, Oklahoma, 74055, or the Oklahoma ALS Association, P.O. Box 14482, Tulsa, Oklahoma, 74159. Arrangements and services were entrusted to Mowery Funeral Service of Owasso. www.moweryfs.com

Janice Ellen Rice, 78, of Owasso, Oklahoma, went home to be with her Savior May 3, 2020, with her family by her side after fighting a courageous battle with ALS. She was born March 26, 1942 in Lockesburg, Arkansas, to the late Autry C. and... View Obituary & Service Information

The family of Janice Ellen Rice created this Life Tributes page to make it easy to share your memories.

Janice Ellen Rice, 78, of Owasso, Oklahoma, went home to be with...

Send flowers to the Rice family.