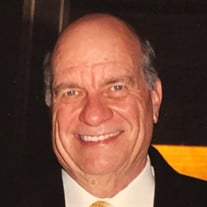 On Wednesday, December 23rd, 2020, Jerry Gillespie, husband, father, and grandfather, passed away at the age of 74. Jerry was born on April 10, 1946 in Borger, TX. He moved to Oklahoma as a teenager where he would reside until retirement. On December 30th, 1967 he married Charla Gillespie, they raised two sons, Rick and Michael. Jerry served as a 2nd Lieutenant in the Army National Guard, and spent his entire career in sales, eventually becoming a vice president and partner at Callidus Technologies. After retirement, he returned to his beloved home state by living on the shores of Lake Texoma in Pottsboro, TX. Jerry had a deep love for his faith, family, friends, and golf. He was frequently seen on the links of The Patriot Golf Club. Jerry also was drawn to the untamed American West. His lifelong dream of being a cowboy was fulfilled by trips to Wyoming where his father-in-law brought him in to assist with the fall cattle drive. Jerry was a member of the Memorial Bible Church family, and active member of Jenks Bible Church. He was compassionate and outgoing, and made quick friends with everyone he met. Jerry was preceded in death by his father Dewey, his mother Ruth, and his brothers Loyd, Don, and Doug Mitchell. He is survived by his wife Charla, his sons Rick and wife Mandi, Michael and his wife Laura, his four grandchildren Cade, Elle, Jack, and Katherine. Sisters Jean Howard and Judy Shrum of Texas, and many beloved nieces, nephews, and cousins. A memorial service will be held 12:45 p.m. Friday, March 19, 2021, at the Patriot Golf Course in Owasso, Oklahoma. In lieu of flowers, donations may be sent to the Alzheimer’s Association of Tulsa or the Salvation Army. Arrangements and services were entrusted to Mowery Funeral Service of Owasso. www.moweryfs.com

On Wednesday, December 23rd, 2020, Jerry Gillespie, husband, father, and grandfather, passed away at the age of 74. Jerry was born on April 10, 1946 in Borger, TX. He moved to Oklahoma as a teenager where he would reside until retirement. On... View Obituary & Service Information

The family of Jerry D Gillespie created this Life Tributes page to make it easy to share your memories.

Send flowers to the Gillespie family.