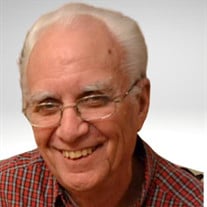 Jerry Franklin Guiltner was born November 4, 1941, in Paragould, Arkansas, to J.F. “Dobe” and Mary Nima McDonald Guiltner. He died Sunday, May 3, 2020, in Tulsa, Oklahoma, at the age of 78 years. Jerry was reared and educated in Paragould and was a graduated of Paragould High School. He was a veteran of the armed forces having served his country honorably with the United States Navy. He completed his education at Arkansas State University where he earned his bachelor’s degree in journalism. He was married April 16, 1971, in Little Rock, Arkansas, to Shirley Flynn. Jerry spent much of his working life in communications, particularly in radio. He worked as the radio program manager with Southwest Radio Ministries. He was passionate about sharing Jesus and his love for others. He and Shirley had made their home in Owasso, Oklahoma, since 2017, and were members of the First Baptist Church. Jerry enjoyed a variety of pastimes including fishing, reading, and watching sports. He was particularly fond of his role as “Gramps” to his grandchildren. Those he leaves behind who hold many cherished memories include: His wife of over 49 years; Shirley, of the home Children: Steve Davis and wife Angela, of Camden, Arkansas Scott Guiltner, of San Marcos, California Julie Greene and husband Doug, of Sherwood, Arkansas Kenneth Davis, of Wichita, Kansas Keith Davis and wife Amy, of Oologah, Oklahoma Clay Guiltner and wife Erin, of Los Angeles, California 16 Grandchildren Four great grandchildren Brother; Jay Guiltner and wife Betty, of Marion, Arkansas He was preceded in death by his parents, an infant sister, and grandson, Weston Guiltner. Due to the current constraints, the service can be viewed 10:00 a.m. Thursday, at fbcowasso.org/memorial. The family requests memorial contributions be made to The Mission-FBO, 11341 North Garnett Road, Owasso, Oklahoma, 74055. Arrangements and services were entrusted to Mowery Funeral Service of Owasso. www.moweryfs.com

The family of Jerry Franklin Guiltner created this Life Tributes page to make it easy to share your memories.

Send flowers to the Guiltner family.