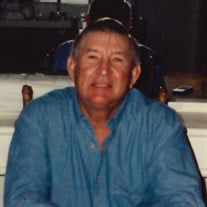 Jesse James “Jim” Tosh was born on February 25, 1935 in Eucha, Oklahoma to Andrew Jesse Tosh and Louella (Johnson) Tosh. He passed from this life on Monday, June 14, 2021 at his home in Owasso, Oklahoma at the age of 86 years. Jim was raised and educated in Colcord, Oklahoma and graduated with the Colcord High School Class of 1952. After high school he was drafted and served his country honorably in the United States Army. Jim was married on December 7, 1962 in Tahlequah, Oklahoma to Joyce Ann (Amos) Tosh. He spent most of his working life as Plumbing Contractor and worked for himself at Tosh Plumbing for over 50 years. Jim was a very hard worker and enjoyed a variety of past times such as fishing, gardening, and spending time with his family and especially his grandchildren. Those he leaves behind who hold many cherished memories include: His Wife; Joyce Tosh 3 Children; Teresa Mangrum and husband Todd Kevin Tosh Lori Jones and husband Eric 5 Grandchildren; Madison, Spencer, Tyler, Kayla, and Stella 3 Sisters; Anita, A.Q., and Naomi He was preceded in death by his parents, Andrew and Louella, and 2 brothers, George and J.T. Visitation will be held 4:00 p.m. to 8:00 p.m. on Thursday, June 17, 2021 at Mowery Funeral Service. Funeral service will be 10:00 a.m. on Friday, June 18, 2021 at the Mowery Funeral Service Chapel in Owasso with Pastor Aaron Clemons officiating. Graveside service will be 2:00 p.m. on Friday, June 18, 2021 at Fort Gibson National Cemetery in Fort Gibson, Oklahoma. Arrangements and service were entrusted to Mowery Funeral Service in Owasso.

The family of Jesse James "Jim" Tosh created this Life Tributes page to make it easy to share your memories.

Send flowers to the Tosh family.