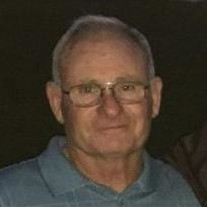 Jimmy Ray Alderson was born January 30, 1948, in Checotah, Oklahoma, to Willie and Edith Hagan Alderson. He died Saturday, February 16, 2019, in Tulsa, Oklahoma, at the age of 71 years. Jimmy completed his secondary education in Fort Smith, Arkansas, and graduated with the Northside High School Class of 1966. He was married July 23, 1966, in Fort Smith to Judy Laverne Kelly. They had made their home in the Owasso area for over 43 years. Jimmy spent over 20 years with Apache Fixture Company in Tulsa before becoming the business owner of A & M Construction Company. He was a talented carpenter and also spent time remodeling houses. He was a veteran of the armed forces having served his country honorably for over 25 years with the United States Army Reserve. He enjoyed a variety of pastimes, especially attending car and vehicle shows. He was very proud of his 1934 4-door Ford sedan and his 1937 5-window Ford coupe. He entered car shows and won many awards all across the United States. Those he leaves behind who hold many cherished memories include: His wife of over 52 years; Judy, of the home Grandchildren; Emily Alderson, of Sperry, Oklahoma Brian Alderson, of Owasso Amanda Holt, of Yukon, Oklahoma Chris Strong and wife Emily, of Tulsa Two great grandchildren; Bentley Clark, and Kyleen Hammonds Brother; Ben Alderson, of Coweta, Oklahoma Sister; Goldie Harvey, of Sallisaw, Oklahoma Brother; W.C. Alderson and wife Louise, of Ashville, North Carolina He was preceded in death by his parents, son Gregory Ray Alderson, sister, Bonnie Paton, brother, John Alderson, and brother, Roger Alderson. Visitation will be held from 4:00 p.m. to 8:00 p.m. Wednesday, February 20, 2019, at Mowery Funeral Service of Owasso. Funeral service will be held 1:30 Thursday, February 21, 2019, at the Mowery Funeral Service Chapel in Owasso with Pastor Leonard Pirtle officiating. Serving as casket bearers will be Joe Mounce, Gordan Ewing, Harold McLain, Gary Thompson, Kurt Schrader, and Chuck Holladay. Committal services and interment will follow at Graceland Memorial Park Cemetery in Owasso. Military honors and flag presentation will be rendered by the United States Army. Arrangements and services were entrusted to Mowery Funeral Service of Owasso.

The family of Jimmy Ray Alderson created this Life Tributes page to make it easy to share your memories.

Send flowers to the Alderson family.