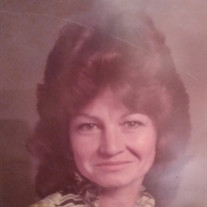 Joann Lucille Lambert was born April 2, 1938, in Adair, Oklahoma, to Woodrow George and Jessie Marie Bennett Hanson. She died Sunday, August 1, 2021, in Claremore, Oklahoma, at the age of 83 years. Joann married Thomas Lambert and together they raised three children, Tommie, Terry, and Jesse Lambert. They lived in Owasso from 1970 until all the kids graduated, at which time Joann went back to school and earned her GED. She began working as a bookkeeper and teller with Northside State Bank where she made many friends. She continued her education attending Sapulpa Vo-Tech becoming a licensed practical nurse. She began her nursing career with Claremore Indian Hospital, then with Green Country Home Health, where she became very close with some of her patients. Joann loved finding “treasures” at garage sales and flea markets. She was an avid reader of books, magazines, and newspapers. She had a remarkable memory with the ability to remember names, dates, and even event with great detail and accuracy. For the past 30 years she has made her home in Claremore. She dearly loved her family, especially the grandchildren and great grandchildren who affectionately knew her as Granny and Grand Mimi. Those she leaves behind who hold many cherished memories include: Her children; Tommie Boyd and Jesse Lambert Grandchildren; Doc Boyd Lance Miller and wife Ryan Jessica Lambert Shelby Lambert Tyler Lambert and wife Krys Great grandchildren; Cole Boyd Peyton, Paxton, and Preslee Miller Kylee Lambert and Kannon Lambert Chloe Wilkins and Ella Wilkins Sister; Norma Hanson Brothers; George Hanson and wife Brenda, of Ketchum, Oklahoma Tom Hanson, of Broken Arrow, Oklahoma Charlie Hanson, of Vinita, Oklahoma And her dog, Winston She was preceded in death by her parents, her husband Thomas, daughter, Terry Lambert, and niece, Tommie Lambert Wilkins. Private family disposition will be held at a later date. The family requests memorial contributions be made in Joann’s memory to Sperry Christian Church, 208 East Main Street, Sperry, Oklahoma, 74073. Arrangements and services were entrusted to Mowery Funeral Service of Owasso. www.moweryfs.com

The family of Joann Lucille Lambert created this Life Tributes page to make it easy to share your memories.

Send flowers to the Lambert family.