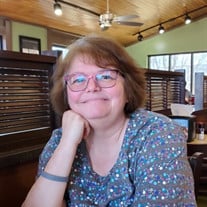 OBITUARY FOR JOANNA CHAVEZ Joanna “Jody” May Chavez was born September 17, 1959, in Tulsa, Oklahoma, to Donald Revell and Nora Maxine Richison Roberts. She died Monday, August 2, 2021, in Owasso, Oklahoma, at the age of 61 years. Jody completed her secondary education in Tulsa and graduated with the Central High School Class of 1977. Soon out of high school, Jody began an over 40-year career with Cox Cable Company. She was incredibly dedicated to her work life and even though changes were sometimes hard, she rallied and did her best to be the queen of tribal knowledge and even the who, what , where, and why things were done. Jody loved to travel and took every advantage to extend a work trip by a few days and have an adventure. She was always up for a good road trip and museum. She had grand adventures in Atlanta, Memphis, St. Louis, Phoenix, Las Vegas , New York, Atlantic City, and even Oklahoma City. Jody was also a lover of good food. She was a fan of anything home cooked. Her favorite eating places were mom and pop restaurants like Nieves Mexican Grill, Nelson’s Buffeteria, Shiloh’s, Savoy, Tandoori Brothers, and Amazing Thai Cuisine. If the appetizer game was on point, that was even better! Jody loved blessing her friends and family with support. Sometimes you would come in and find strange things on you chair like a headlamp for crocheting, or a mosquito hat for camping. If she could get it on Groupon that was even better – She loved a good Groupon!! She loved a good potluck or just lunch. She developed a reputation for planning potlucks with the IT team in Tulsa and also just making lunch for all in a crockpot. She did not enjoy cooking for one, so this was the way to cook for a group. She loved any gadget and Pampered Chef. Jody enjoyed music and attended many concerts, that might surprise many people, including groups such as Sammy Hagar, Trace Adkins, Toby Keith, Three Dog Night, America, Joan Jett, Tesla, and Styx. Jody leaves behind many friends who hold many cherished memories. Family members include her brother, Don Roberts and his wife Lisa, and her sister Gloria Roberts, her nieces, Angela Carlile (Charles) and Hanna Roberts. Memorial service will be held 2:00 Tuesday, August 10, 2021, at the Mowery Funeral Service Chapel in Owasso with Pastor Leonard Pirtle officiating. Private family disposition will be held at a later date. The family requests memorial contributions be made in Jody’s memory to www.streetcatstulsa.com or www.garysinisefoundation.org. Arrangements and services were entrusted to Mowery Funeral Service of Owasso. www.moweryfs.com

The family of Joanna May Chavez created this Life Tributes page to make it easy to share your memories.

OBITUARY FOR JOANNA CHAVEZ
Joanna “Jody” May Chavez was born...

Send flowers to the Chavez family.