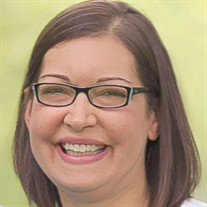 Jody Lee Rathbone was born August 14, 1981, in Robbinsdale, Minnesota, to William Carl Froebel and Sharon Lee Weiss. She died Friday, June 8, 2018, in Rochester, Minnesota, at the age of 36 years. Jody completed her secondary education at Columbia, Missouri, and graduated with the Rock Bridge High School Class of 1999. While in high school, she participated in volleyball and basketball earning All-State honors in both sports. She continued her education at the University of Missouri Kansas City where she earned her Doctor of Pharmacy. Jody was married July 5, 2003, in Tulsa, Oklahoma, to Scott Rathbone. She spent most of her working life as a pharmacist with Reasor’s and was a member of the Oklahoma Pharmacists Association. She was a faithful member of First Church Owasso. Jody enjoyed a variety of pastimes including gardening, cooking, and crafts. Those she leaves behind who hold many cherished memories include: Her husband; Scott, Two sons; Caleb Rathbone and Grant Rathbone, all of the home Sister and brother-in-law; Julia and Nathan Zuidhof, of Owasso Mother; Sharon Bennett, of Columbia, Missouri Father; Bill Froebel and his wife Debby, of Columbia, Missouri Visitation will be held from 5:00 p.m. to 7:00 p.m. Thursday, June 14, 2018, at Mowery Funeral Service in Owasso. Funeral service will be held 10:00 a.m. Friday, June 15, 2018, at First Church Owasso with Pastor Adam Stang officiating. Committal service and interment will follow at Graceland Memorial Park Cemetery in Owasso. In lieu of flowers the family requests that memorial donations be made in Jody’s memory to The Jody Lee Rathbone Memorial Fund at RCB Bank, 11633 East 86th Street North, Owasso, Oklahoma 74055. Arrangements and services were entrusted to Mowery Funeral Service of Owasso. www.moweryfs.com

The family of Jody Lee Rathbone created this Life Tributes page to make it easy to share your memories.

Send flowers to the Rathbone family.