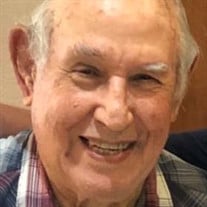 John Colvey (J.C.) Cook, Jr., 84, of Collinsville, Oklahoma, passed away on Wednesday, September 18,, 2019 at St. Francis Hospital with family by his side. J.C. was born April 8, 1935, in El Reno, Oklahoma to John Colvey Cook Sr. and Emma Jane (Johnston) Cook and was an only child. He grew up helping his mother on the farm, as his father passed away when he was only 6 years old. He started first grade early at the age of 5 so there would be 2 kids in the class at the one-room schoolhouse where he rode his horse to every day in Geary, Oklahoma. He attended school there until the 8th grade. Then he and his mother moved to Owasso and bought a farm (naming it Cook Angus Farm), where Bailey Ranch Estates is to this day. J.C. played high school baseball and was a Lifetime Owasso FFA Alumni member. He graduated from Owasso High School in 1952. He married in 1960, divorced in 1988, and from that marriage gained a son and daughter. The farm in Owasso was sold in 1983, and the family moved to Collinsville. He had several occupations throughout his life: realtor, owned a John Deere store, the Tastee Freez and Angus Barn Restaurant in Collinsville. His most recent job was security guard at various places, mainly the Gilcrease Museum. But the job he held dear to his heart and was most passionate about was being a Registered Angus breeder for 68 years. He was an avid St. Louis Cardinals, Dallas Cowboys, and OSU fan. He was a dedicated fan to sporting events of not only his children, but his grandchildren. He loved feeding and watching birds, was a horse-racing handicapper and coached baseball and softball. Most of all, he was very proud of his children, grandchildren, and great-grandchildren. He loved spending time with his family and was known fondly as Papa J.C. He is survived by his former spouse Idell Cook, son John Cook (Nancy), daughter Mary Young (Russell), grandchildren Amy, David, Ryan, Matt, Nathan, and Rachel (Stephen), step grandson Corey (Carly), great grandchildren Luke and Bristol, step great grandchildren Landree, Henlee, and Cooper, cousins, many friends, cattle, and beloved dog Stormy. He was preceded in death by his parents John and Emma Cook. A memorial service will be held on Monday September 30th at 2:00 at Tulsa Christian Center Ministries at 8920 E 31st, Tulsa, Oklahoma with daughter-in-law, Dr. Nancy Cook officiating. Arrangements were entrusted to Mowery Funeral Service of Owasso. Should friends desire, the family suggests sending memorial contributions to the American Heart Association or the charity of your choice.

The family of John Colvey Cook created this Life Tributes page to make it easy to share your memories.

Send flowers to the Cook family.